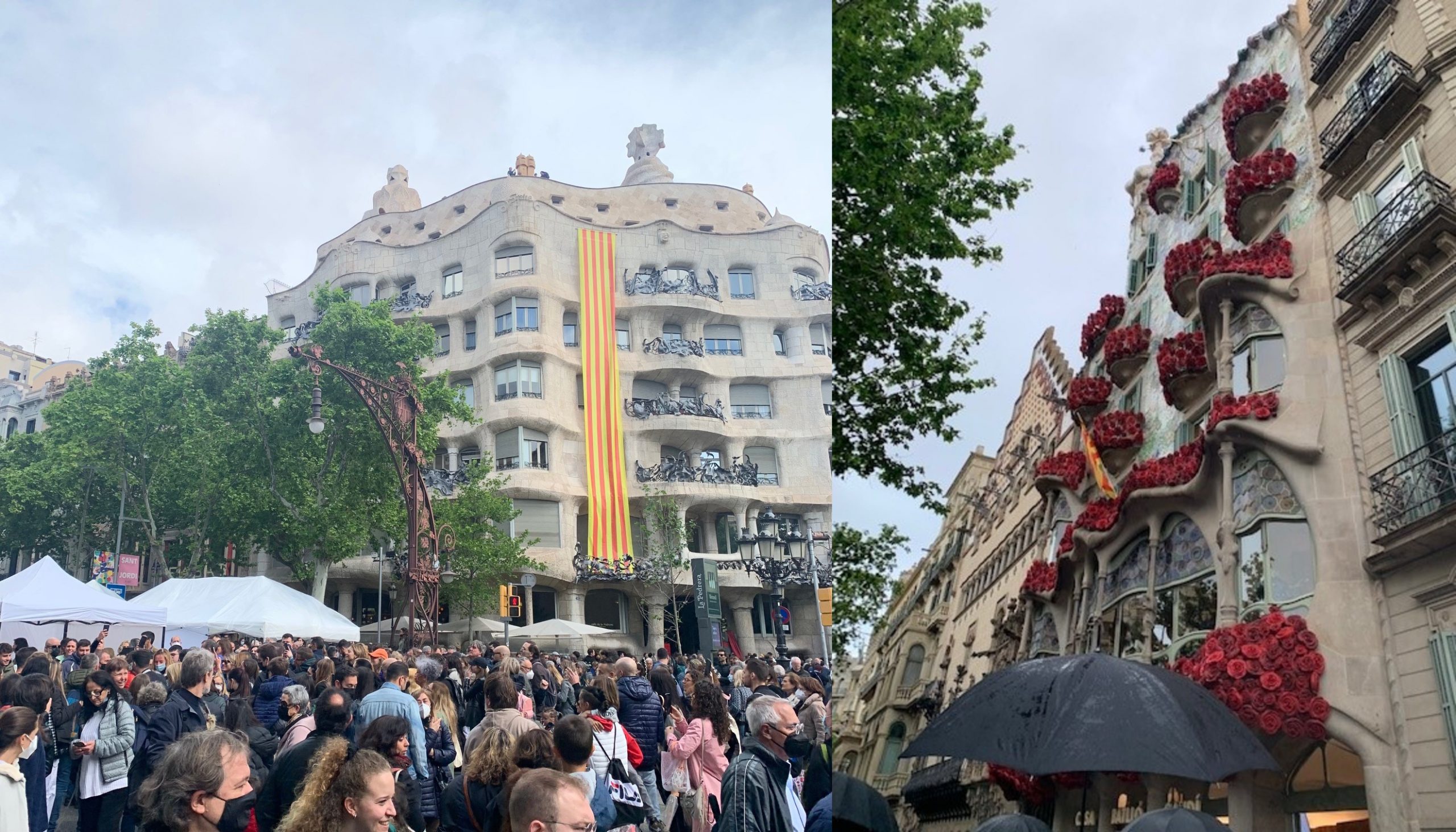 World Book Day, every April 23rd, is a very special event happening in the streets of Barcelona, where hundreds of thousands of people take the city looking for books and roses to buy and gift to their loved ones. It is also the day when hundreds of authors of all kinds of books are invited by booksellers to sign their books in the streets, and so readers have the chance to meet them (some more easily than others!). This Sant Jordi 2022, once again without masks nor any “pandemic restrictions”, editors and journalists ran up and down the main streets in Barcelona accompanying writers on their busy signing schedules. For booklovers, Sant Jordi is the most amazing day of the year and despite the unstable weather (it rained and even hailed, and several bookshops and publishing houses suffered important losses!) it was beautiful as always! 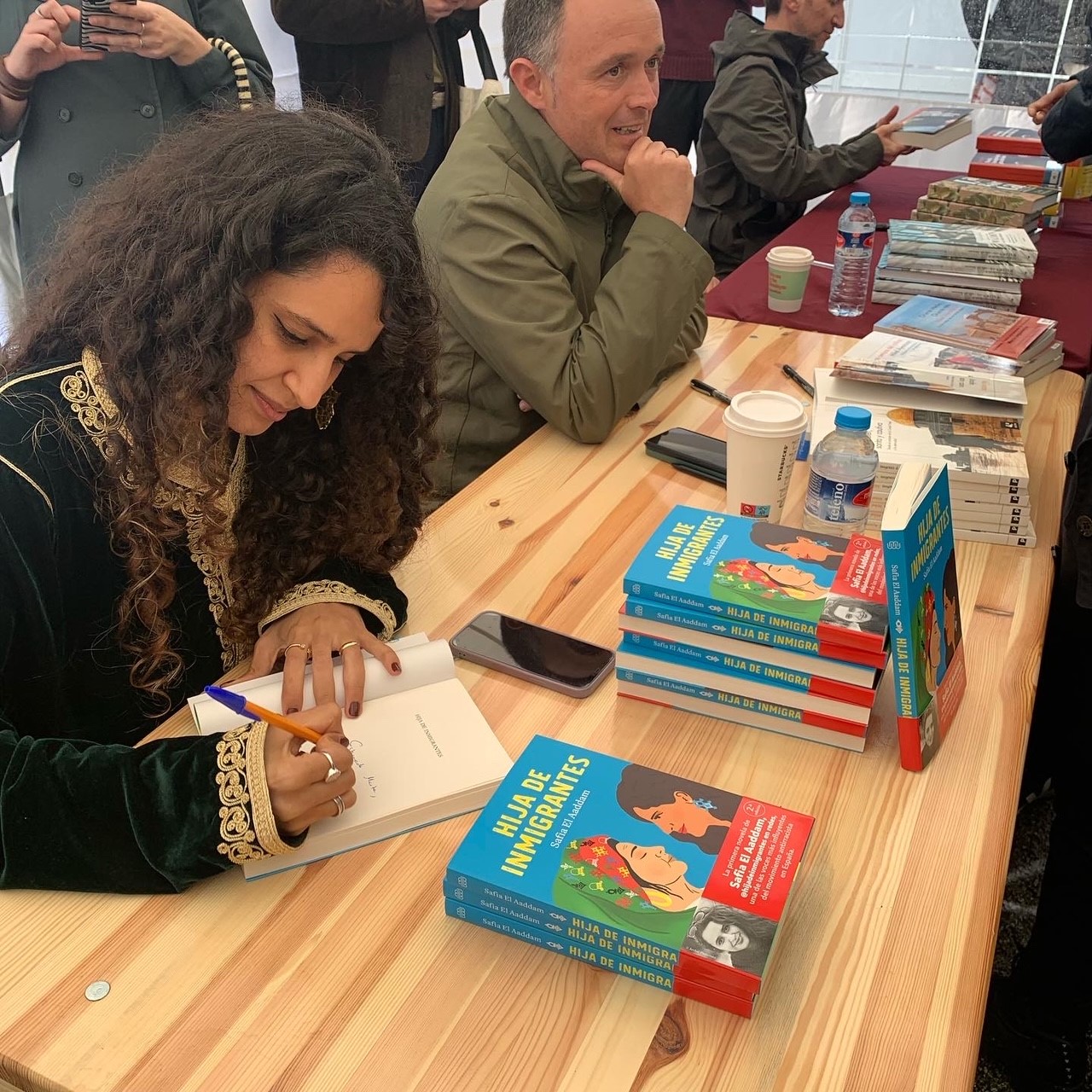 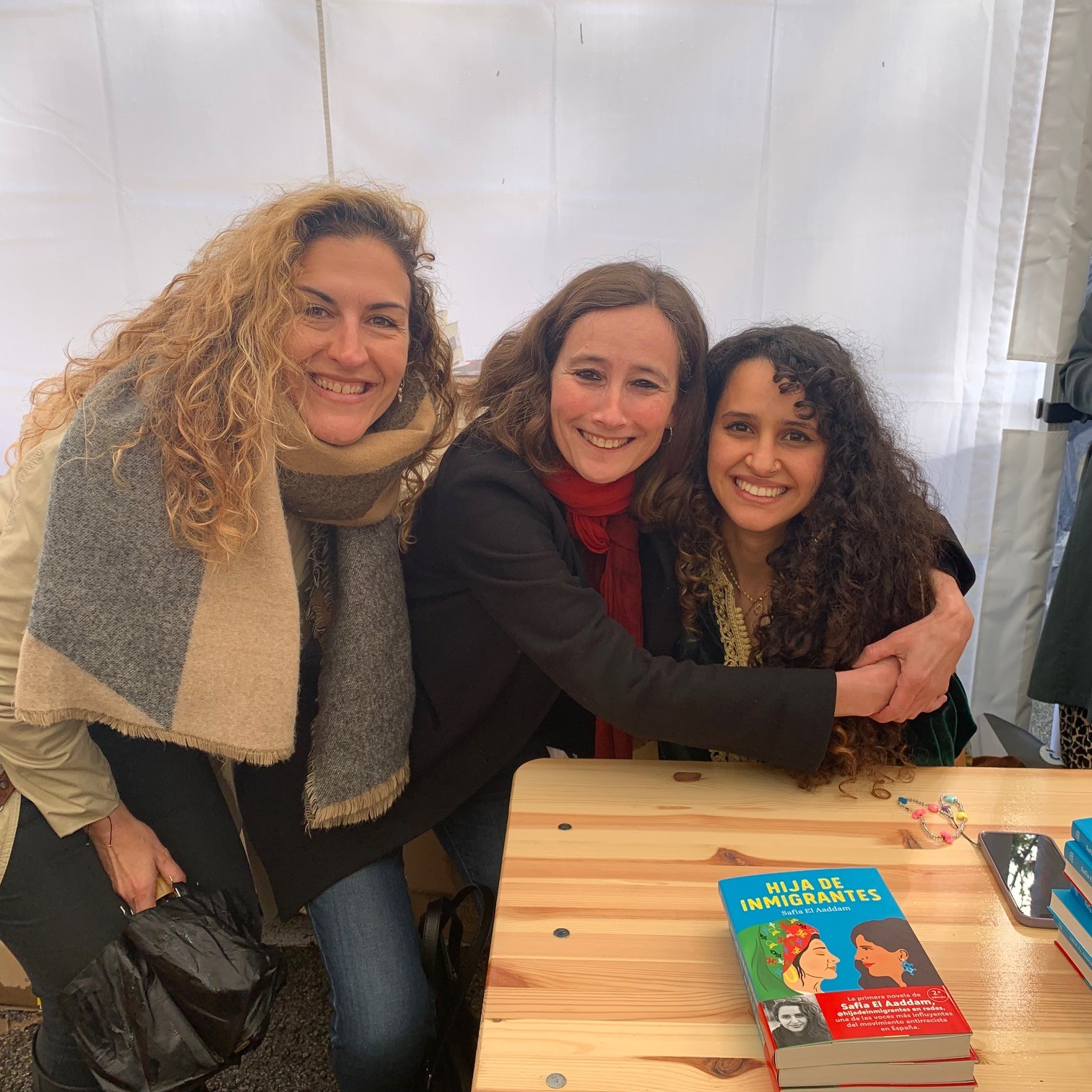 Two Pontas debut authors (Safia El Aaddam and Ennatu Domingo) signed their books this year for the first time. Safia El Aaddam (above, pictured on the right with Carolina Martínez and Anna Soler-Pont from the Pontas team) was busy signing her novel Daughter of Immigrants (Hija de inmigrantes), recently published by Nube de Tinta/Penguin Random House, while Ennatu Domingo (below, pictured on the right with fellow author Blanca Busquets) signed copies of Burnt Eucalyptus Wood (Fusta d’eucaliptus cremada), just out with Navona in Catalan and Spanish and soon to be translated into English at The Indigo Press. 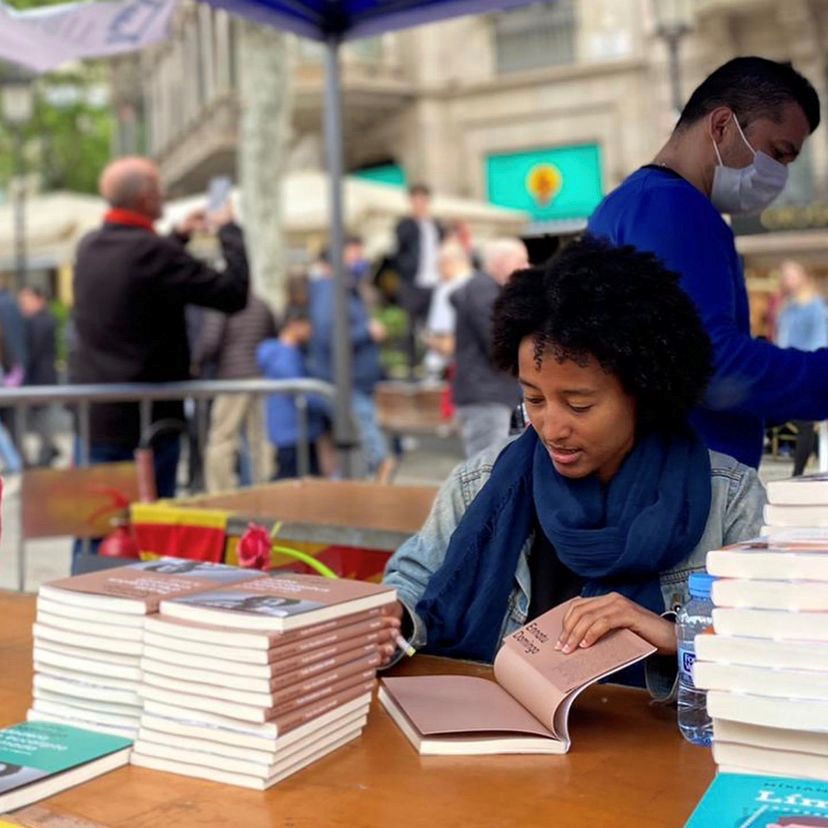 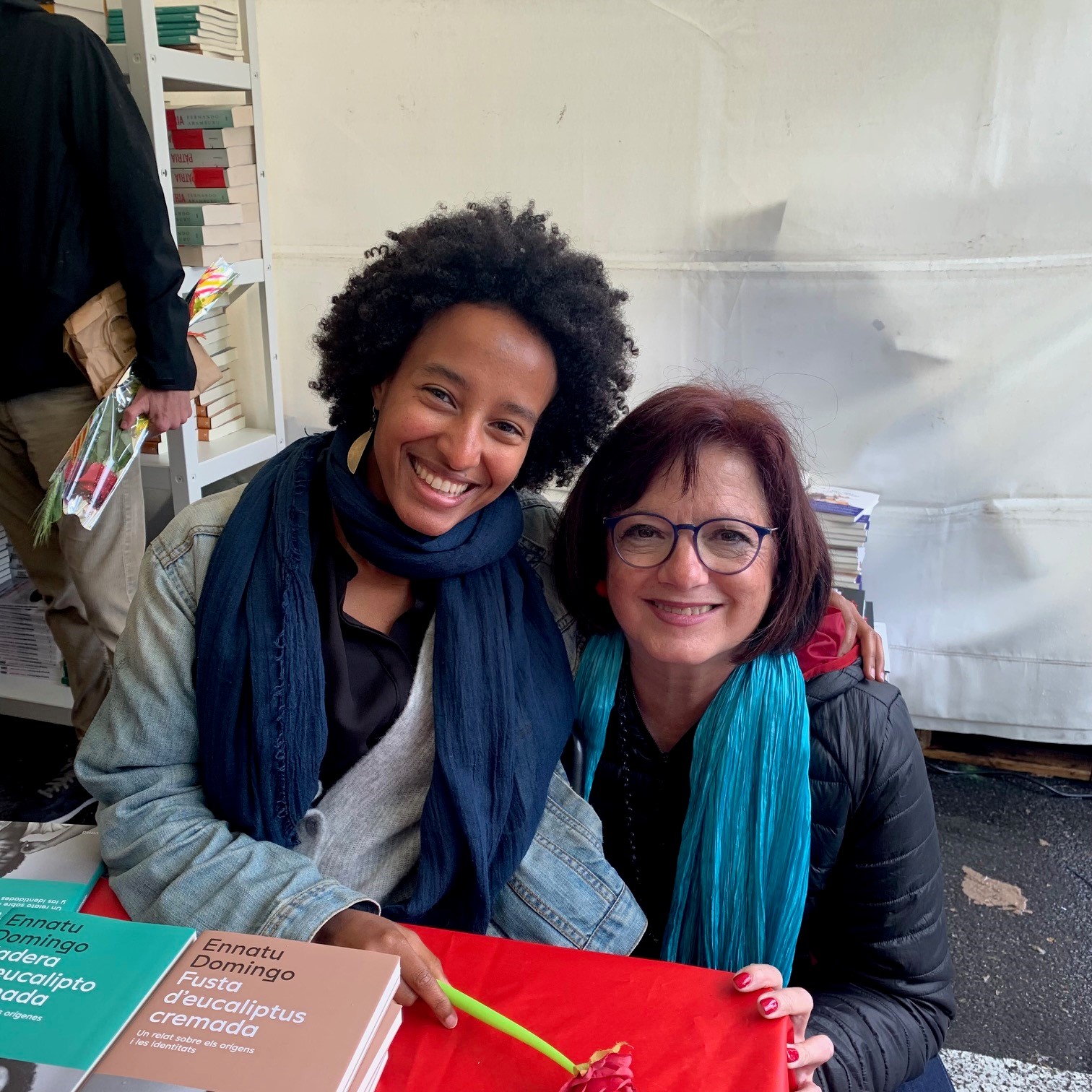 Laura Gost and Rafel Nadal had busy schedules all day, only stopping for lunch. Laura Gost (below left) signed copies of her second novel, The World Becomes Easy (El món es torna senzill) which was published in its original Catalan by Empúries in February 2022. It will be out in Spanish this Autumn with Editorial Barrett. Rafel Nadal (below right) signed copies of many of his titles, mostly of his latest, When Words Fall into Oblivion (Quan s’esborren les paraules), which was published in November 2021 and became an instant bestseller. 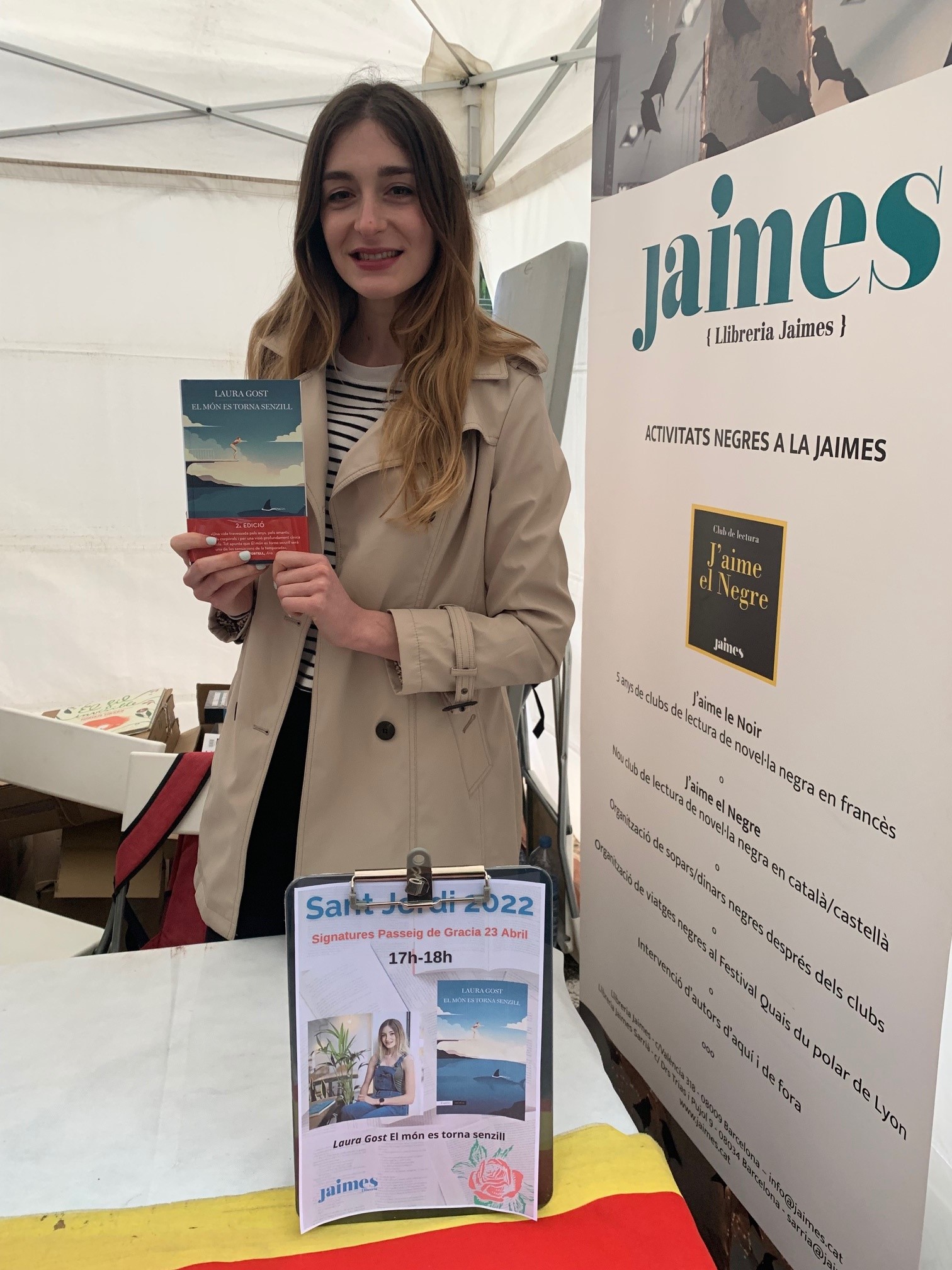 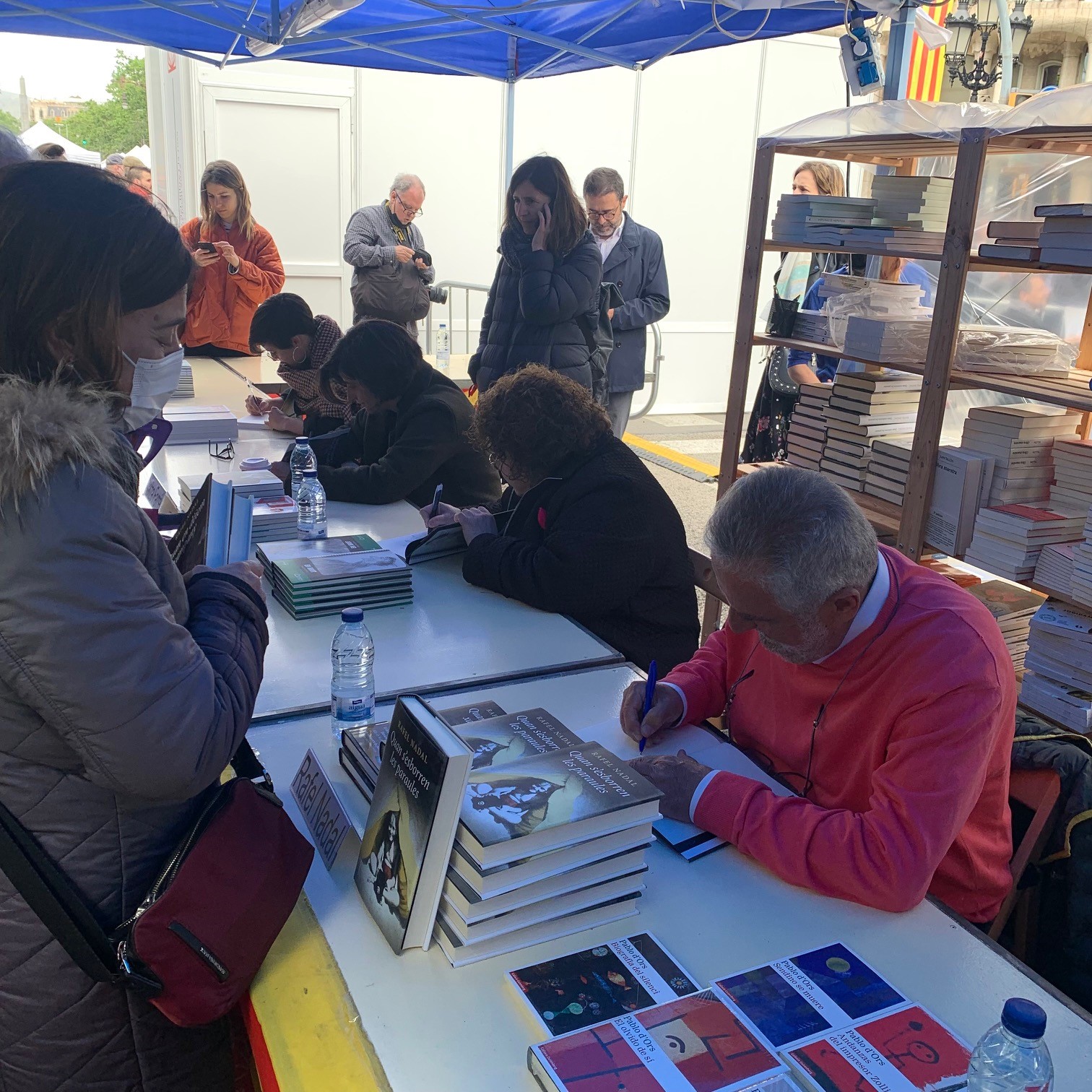 Blanca Busquets and Martí Gironell also had new books out for this edition of Sant Jordi. Blanca Busquets (below left) signed copies for her fans of her latest novel, Constellations (Constel·lacions), a family saga, while Martí Gironell (below right, pictured with illustrator Coaner Codina) entertained a younger audience, signing copies of his new beloved picture book for children, A Mole in Ancient Egypt (Un talp a l’antic Egipte), the second adventure starring Felip the mole. 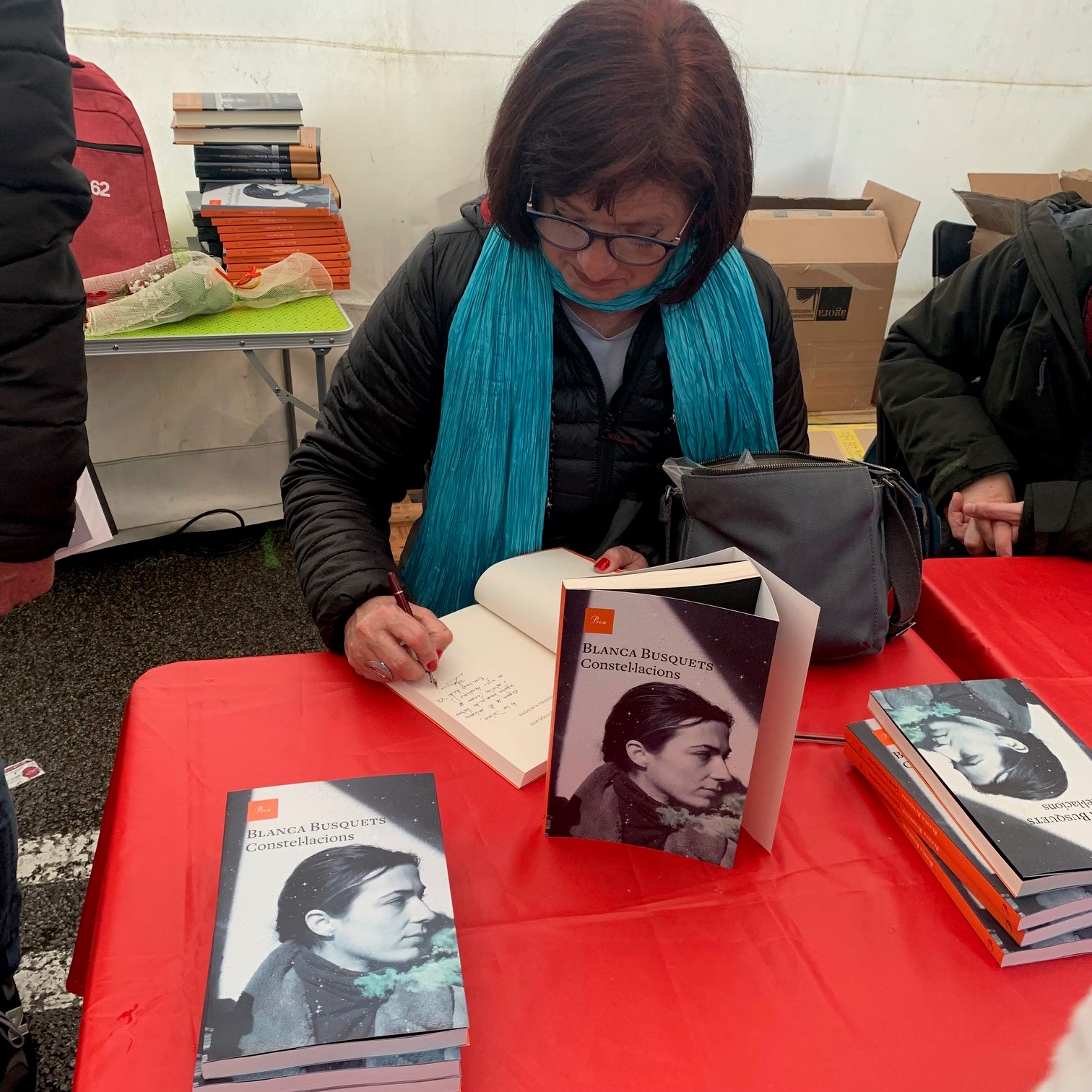 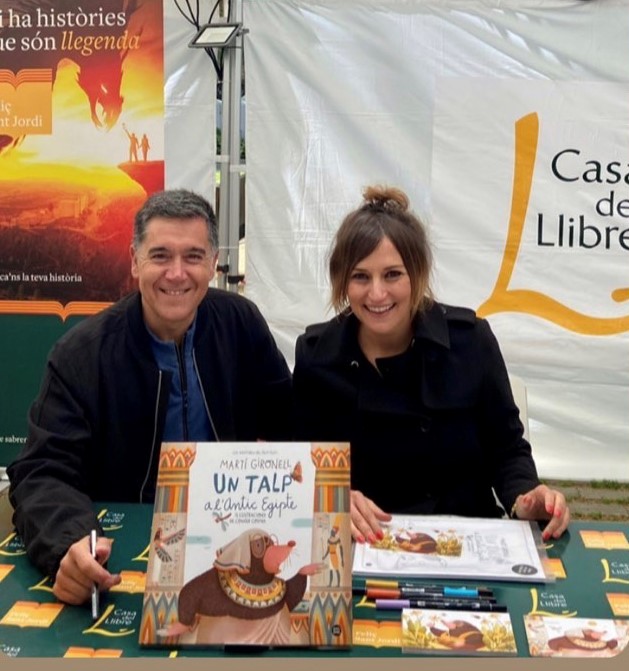 On Sant Jordi, even though new releases top the bestseller lists, booksellers also invite many authors to sign books that are not necessarily new releases! Albert Betran (below left) signed copies of his debut novel, Memory Is You (La memoria eres tú) which was published in early 2021 and was recently reissued in paperback. And last but not least, the 9th author represented by the Pontas Agency signing books at this year’s Sant Jordi was Natàlia Romaní (below right), who signed copies of her debut novel published in September 2021 both in the original Catalan and Spanish by Univers, The History of Nostalgia (La història de la nostàlgia). 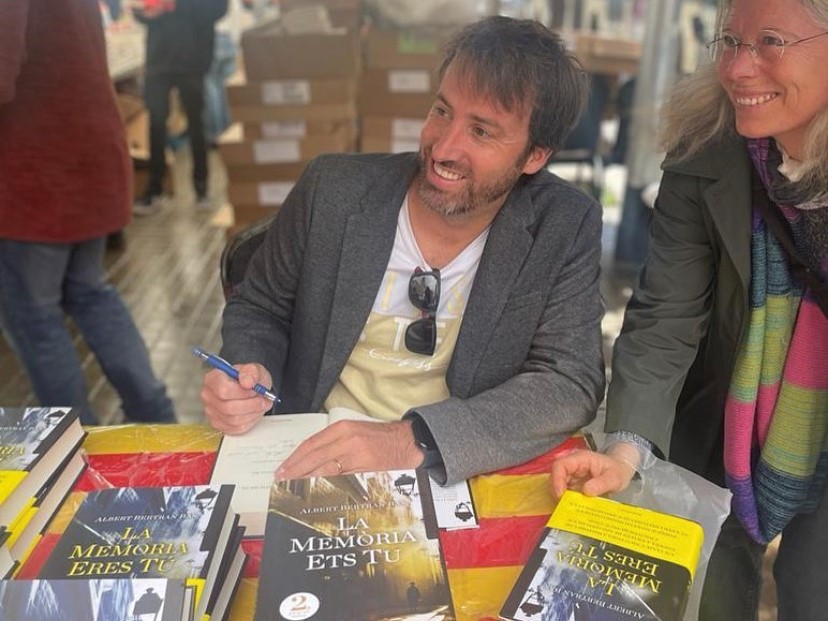 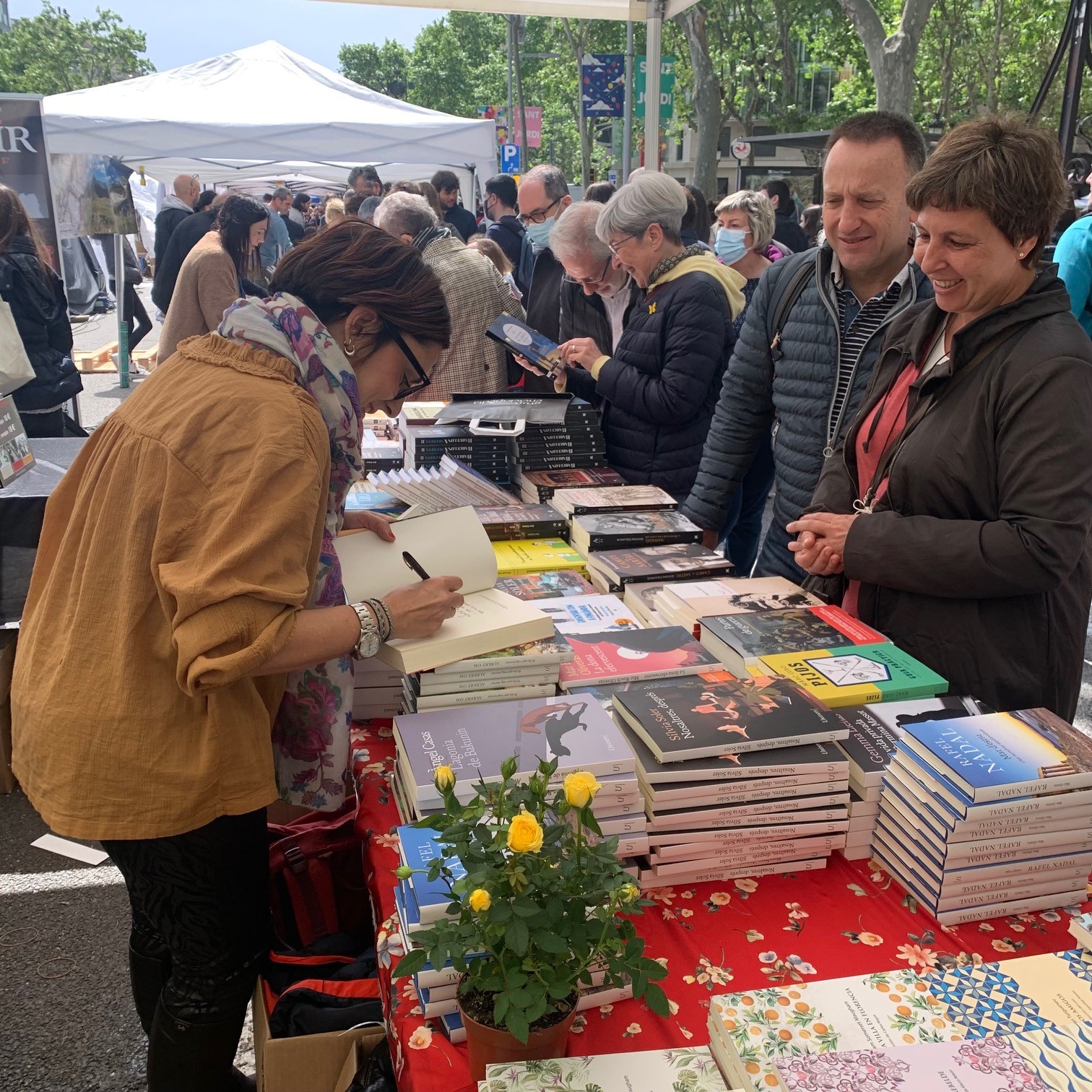 See you all next year! 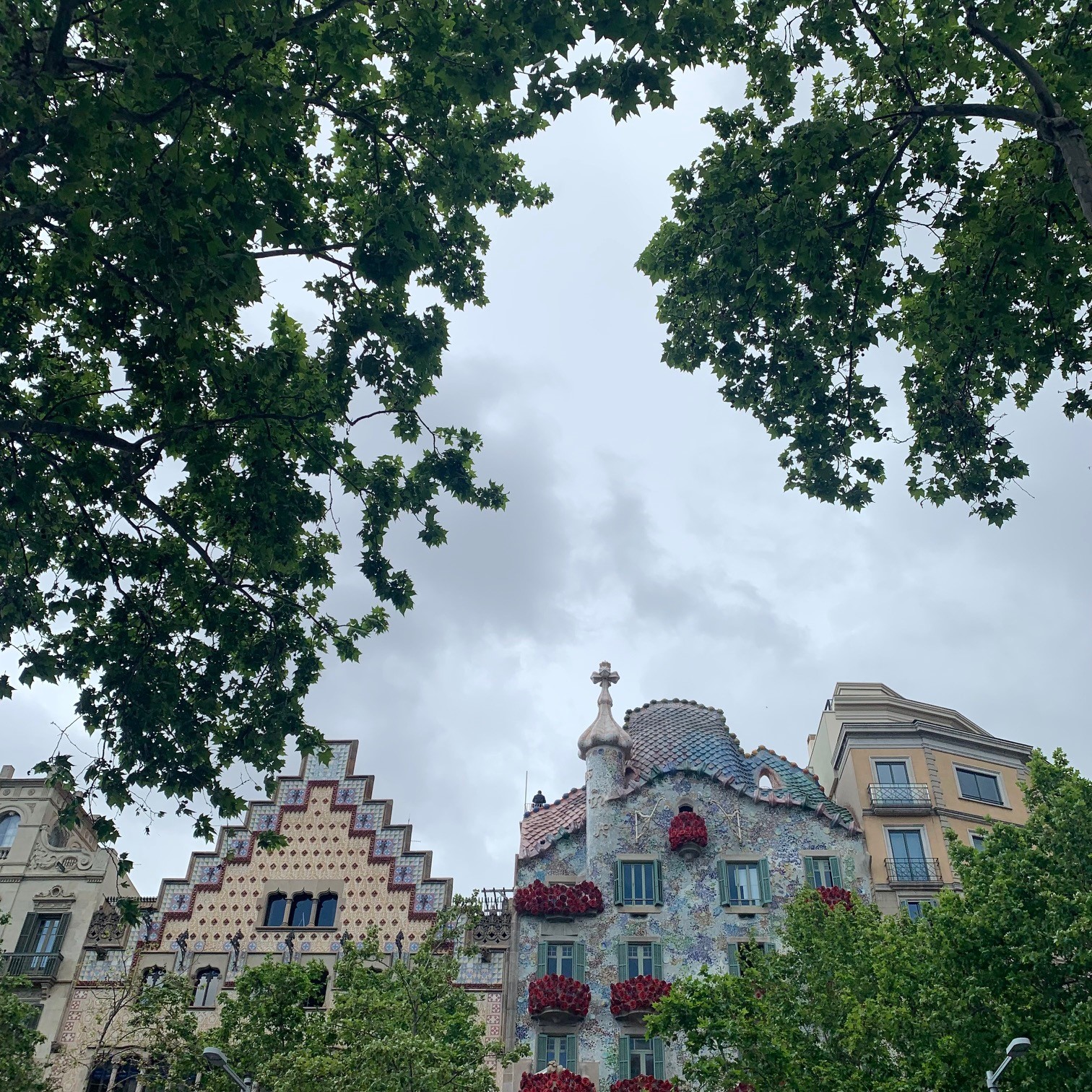