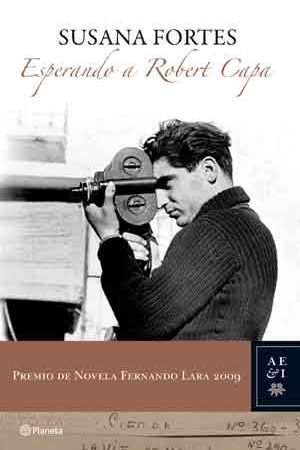 Waiting for Robert Capa is based in the love story and professional relationship between a young German woman called Gerta Pohorylle and a young Hungarian man called Endre Friedmann since they met in Paris in 1935 until she died in the Spanish Civil war in 1937. Both communists, Jewish, exiled and photographers, they decided to change their names in order to sell better their works and so became Gerda Taro (as an hommage to the Japanese Taro Okamoto) and Robert Capa (a mix of Robert Taylor and Frank Capra, so he could seem an American photographer). With these new identities, they arrived to Spain to inform about the Civil War.

Love, war and photography marked their lives. They were young, antifascist, good-looking and nonconformist. They had everything in life and they put everything at risk. They created their own legend and remained faithful to it until the last consequences.

The idea of the novel started in January 2008, when The New York Times announced the discovery in Mexico of negatives of pictures taken by Robert Capa and Gerda Taro that had been lost for almost 70 years. Waiting for Robert Capa is a moving tribute to all journalists and photographers who lose their lives to show us the world's daily awakening.