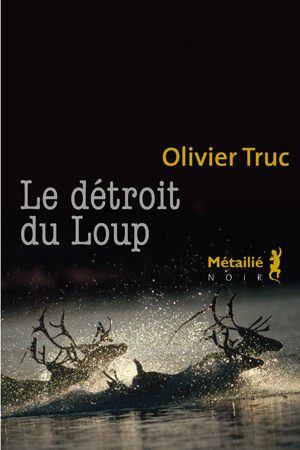 Hammerfest, on the coast of Norwegian Lapland, has become over the last years the base of the oil and gas development in the European Arctic. It is now the period of the longest days of the year. But clear days do not mean a peaceful atmosphere. Several accidental deaths sadden the neighbourhood of the small town. First a reindeer breeder, then the mayor of Hammerfest, then several oil company managers, but also workers, a doctor…

The Wolf Strait tells about a centenarian culture which fights for its survival in a region where development gives priority to the collective interest over personal fates, playing the benefit of some against the desires of others.

“Terribly and furiously gifted. Hats off! Ready to boost the crime genre with a touch of irreverence. The French touch to the ‘arctic sauce’.” Elise Lépine, TRANSFUGE

“A brilliant thriller, rich and exotic as one could wish, reaching out from one point to another under the stabbing light of a night-less spring.” Philippe Blanchet, FIGARO MAGAZINE

“Thanks to Truc, Lapland has become a reference in thriller terms. Bravo.” Marc Gadmer, FEMME ACTUELLE

“Set in a harsh environment, unfamiliar to the reader, Olivier Truc manages to captivate and advocate the Sami cause.” Jean-Claude Perrier, LIVRES HEBDO

“As well as a great dose of change of setting, this novel is also (and mostly) captivating thanks to the psychology of its two main characters.” Michel Litout, CENTRE PRESSE AVEYRON

“With a genuine storytelling talent, Olivier Truc manages to submerge us into the traditional environments such as those of the oil industry. A wonderful crime novel, deep and exotic.” Muriel Fauriat, PÈLERIN

“Like he did in his first novel, [Truc] draws a truly beautiful portrait of the different communities living within the same territory (Lapland), thanks to a series of particularly rich characters who inhabit this dense novel of more than four hundred pages where nothing is left to chance." Christophe Dupuis, LA TÊTE EN NOIR

"As in his first thriller, Olivier Truc not only keeps us on the brink of suspense but he also teaches us, in each page, about the universe of the Great North." Bernard Lehut, RTL