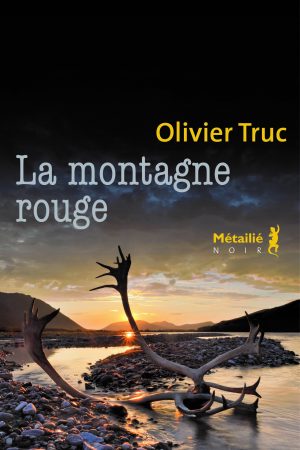 The Red Mountain is the third book in the best-selling pentalogy by Olivier Truc, and continues with the rainy and extremely atmospheric setting in Lapland. While the Balva clan conduct the annual slaughter of the reindeer, human bones are found at the foot of the Red Mountain. Tensions in the region escalate as the clan opposes a group of farmers in a lawsuit in the Supreme Court of Stockholm. Who was there first? Who owns the land?

The identification of those bones will be of vital importance in the trial. In order to know and identify whether the skeleton found is that of a Sami, the police must also find the skull. Or lack of one. Thus a quest through Swedish history, its museums and institutions will begin. In search of all potential evidence of the original presence of the Sami, the police will meet distrust and even hostility and they will also face the mystery of a wave of Sami’s bones and remains disappearances.

Inspector Nina Nansen will try to untangle these several mysteries in an investigation that will led her to often meet ambiguous characters: from obscure archaeologist and academics, to a strange old couple from the Balva clan, obsessed with the Lapland lands and legacy.

As for the other inspector, Klemet Nango, this investigation will have far more consequences than he could have ever imagined, as he will have to face more than ever the challenge of his double identity.