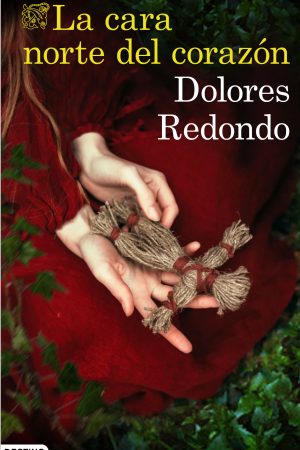 The North Face of the Heart

«When Amaia Salazar was twelve years old, she was lost in the forest for sixteen hours. It was early morning when they found her, thirty kilometers north of the place where she had lost her way. She had vanished under the heavy rain, her blackened and scorched clothing, like that of a medieval witch rescued from a bonfire and, in contrast, her white skin, clean and cold as if she had just emerged from the ice.»

In August 2005, long before the crimes that shook the Baztan valley occurred, a young twenty-five-year-old Amaia Salazar, detective inspector of the Foral Police in Navarra, participates in an exchange programme for Europol police officers at the FBI Academy in the United States, taught by Aloisius Dupree, the head of the research unit. One of the tests consists of studying the real-life case of a serial killer, whom they call “the composer”, who always strikes during great natural disasters attacking entire families and leaving an almost liturgical scene behind. Amaia will unexpectedly become part of the research team, which will take them to New Orleans, on the eve of the worst hurricane in their history, to try to get ahead of the killer...

But a call from her aunt Engrasi in Elizondo will awaken in Amaia old ghosts from her childhood that can change everything, exposing herself, once again, to the north face of the heart.

“I’d never read Redondo’s work prior to encountering The North Face of the Heart, but from the very first pages I was hooked by her masterful and complex storytelling that leads readers down a path that’s so compelling there’s no chance of putting the book down” Sarabeth Pollock, Culturess

“An expertly crafted and riveting thriller of a suspense novel by an author with genuine originality and a flair for the kind of narrative storytelling that keeps the reader's rapt attention from cover to cover, The North Face Of The Heart by novelist Dolores Redondo is an especially and unreservedly recommended addition to community library Contemporary Mystery/Suspense collections.” Midwest Book Review

“After finishing this book, I had barely even closed the back cover before I was sending someone a message making certain that they moved this book right to the top of their TBR list immediately! That’s how intense I felt upon completing Dolores Redondo’s The North Face of the Heart. Do not let the use of the word “heart” in the title fool you. This is not a story of romance! It is an absolutely incredible thriller that is full of tension and excitement, but also loss and grief so powerful that at times it is physically painful.” The Nerd Daily

“Its far-ranging scenes are stuffed with memorable characters, from heroic public servants to habitual murderers to a zombie-like figure worthy of a Val Lewton horror movie. Ms. Redondo’s complex and ambitious book culminates in a mythological showdown, with Salazar in the eye of an epic storm.” Tom Nolan, Wall Street Journal

“The world building in the novel is superb. The depiction of the experiences of Salazar and other characters being caught up in New Orleans during Hurricane Katrina in 2005 is especially remarkable and vivid.” The Big Thrill

“The North Face of the Heart is a tour de force, a mystery with a complicated plot, intriguing characters, and vivid descriptions that bring the settings alive.” Woman Around Town

“This thriller is so wonderfully written—the descriptions of the settings and characters are as compelling as the plot.” Books I Think You Should Read

Included in The Nerd Daily’s “most anticipated thrillers" roundup.

“The mysteries are dark and twisty, and the moments of danger are plentiful. Amaia’s experience with trauma gives her insight into people’s thinking; she uses this knowledge to hunt down new demons. Fans of noir fiction will devour this book.” –Library Journal, Starred Review

"The North Face of the Heart is a novel that will undoubtedly captivate the lovers of the series, but that will surely also please those who have not yet ventured to dare read it, because it also has the immense advantage of being able to read it without having read the Baztan Trilogy. It is a fantastic way to start with the character of Amaia Salazar, because it will not reveal the important plot details of the trilogy. That is why, when I doubted between giving Redondo a score of nine or ten, I have leaned towards the highest grade, because it is undoubtedly the best novel about the Baztan universe written by the author." El búho entre libros

"With the Baztan Trilogy, Dolores Redondo set the bar very high, with this novel she has even gone further. (…) You cannot put it down and the ending is perfect." Qué libro leo

"There are many readers already saying this is Redondo’s Best novel to date. Personally, I think it’s the most balanced and mature, one that closes threads that were tightened in previous books but we wanted to know more about, especially about Amaia Salazar." La opinión de Málaga

"To read this novel is pure joy." A golpe de letra