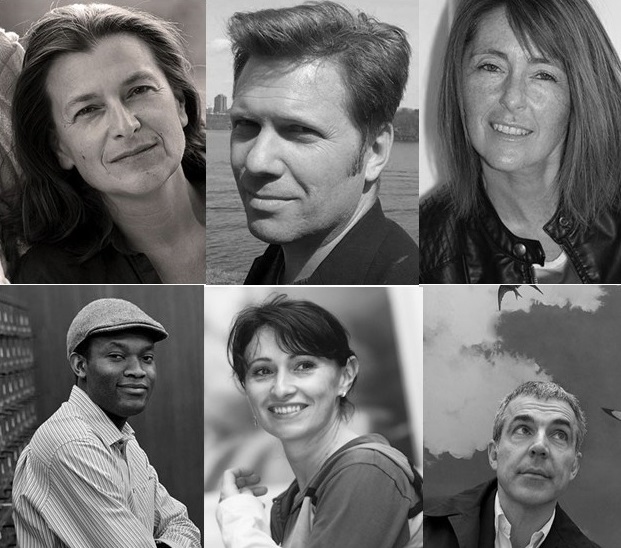 Since the beginning of the 1990s, the Pontas Agency has always had a very “Francophone soul”, which was strongly reinforced in 2009, when Marc de Gouvenain became a partner of the agency. Furthermore, in 2018 we started a regular freelance collaboration with Lily Guillard. In the image above, some of the authors represented by Pontas who write in French (from left to right): Luce Michel, Olivier Truc, Isabelle Bary, Fiston Mwanza Mujila, Emmanuelle Urien and Christophe Carlier.

These first months of 2019, some very different novels by authors represented by Pontas are being released in French.

L’eau de rose by Christophe Carlier has been published by Phébus in January 2019. It tells the story of Sigrid, a romantic novelist who checks into a beautiful hotel of faded grandeur on a remote Greek island and as she writes her new book, she and the small group of guests staying at the hotel intermingle in magical and surreal ways, succumbing to love, nostalgia and intrigue.

Zoé is Luce Michel's third novel, and probably the one who is reaching readers quicker. It has been published by Pygmalion (Flammarion) in January 2019 and we hope word-of-mouth will work, as there is a demand for novels with female protagonists aged forty-five or more, like Zoé. This is a clear-sighted exploration of how relationships evolve with the passing of time, and also a joyful and witty celebration of female friendship.

Le cartographe des Indes Boréales by Olivier Truc (out in March 14th, 2019) is part of Éditions Métailié's special catalogue for its 40th anniversary. This is Olivier’s fourth novel, a stand-alone one that even before its publication date has already been shortlisted for several awards. Set in the XVII century, Izko, the protagonist, is moving from austere Stockholm to the vast, enchanted North; from the mythical fortress of Sagres in Portugal to the taverns of Gothenburg; from bustling Amsterdam to the cursed city of Piteå, and will become, over decades, the cartographer of the Boreal Indies, observer and player in the colonization of Lapland by fanatical clerics.

Lune d'Automne is the French title of Rainbirds, the acclaimed debut novel by Clarissa Goenawan, Indonesian-born Singaporean author who has adopted English as her literary language. Out in February 2019 by Les Escales. Translation rights have already been sold into ten languages so far and we're very curious to see what the French readers will think about this literary suspense set in Japan, described as 'luminous, sinister and page-turning all at once' by Kate Hamer, author of the best-selling novel The Girl in the Red Coat.

Les dix-sept valises by Isabelle Bary, published by Luce Wilquin Éditions in Belgium, has been one of the most acclaimed and discussed novels during the Brussels Book Fair that took place in that city from February 14th – 17th.

Meanwhile, Emmanuelle Urien has finished her new novel, under the working title of La terre est ronde comme un losange (The Earth Is Round Like a Diamond) and will be published before this year ends by Éditions Eyrolles. And Fiston Mwanza Mujila, Congolese author now living in Europe, is finishing his much-awaited second novel, after the great success of his debut Tram 83.