At the Pontas Agency we are over the moon to share the covers for Priya Hein's debut novel Riambel, forthcoming in September 2022 in French with Éditions Globe and in early 2023 in English with The Indigo Press. Translation rights have also been sold to Sembra Llibres (Catalan) and all other translation and audiovisual rights are currently available.

Both Éditions Globe and The Indigo Press have revealed the covers for their respective editions, which are sure to catch readers' eyes in bookshops: 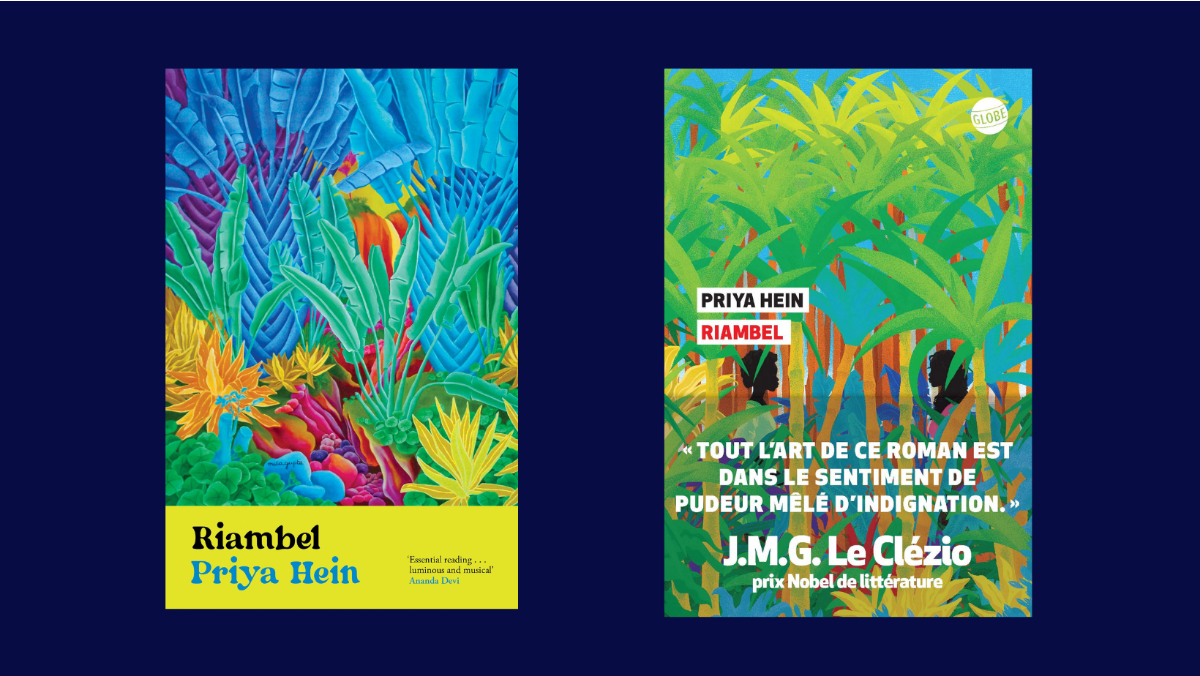 In Riambel, fifteen-year-old Noemi has no choice but to leave school and work in the house of the wealthy De Grandbourg family. Just across the road from the slums where she grew up in Mauritius, she encounters a world that is starkly different from her own ­– yet one which would have been all too familiar to her ancestors. Bewitched by a pair of green eyes and haunted by echoes, her life begins to mirror those of girls who have gone before her.

Within Noemi’s lament is also the herstory of Mauritius; the story of women who have resisted arrest, of teachers who care for their poorest pupils and encourage them to challenge traditional narratives, of a flawed Paradise undergoing slow but unstoppable change.

In Riambel, Priya Hein invites us to protest, to rail against longstanding structures of class and ethnicity. She shows us a world of natural enchantment contrasted with violence and the abuse of power. This seemingly simple tale of servitude, seduction and abandonment blisters with a fierce sense of injustice.

Mauritius-born Priya Hein is the author of several popular children’s books published in English, French, Mauritian Creole, Rodriguan Creole and German. She was selected for the University of Iowa’s International Writing Program - Women’s Mentorship Pilot Project - as one of two female emerging writers for Mauritius. Priya has been published in anthologies, literary journals, magazines and school textbooks. She has participated in numerous book fairs and programs for Mauritian radio and television, was shortlisted for the Outstanding Young Person’s Award and Mauritian Achievers Award, and was nominated by the National Library of Mauritius for the Astrid Lindgren Memorial Award. She lived in Munich for a very long time with her husband and their two children, and at the moment she lives in Mauritius with her family. She was awarded the 2021 Jean-Fanchette Prize for her debut novel, Riambel.

"Riambel bravely grasps the complexity of ethnic relationships in Mauritius . . . displaying great art in the sense of shame blended with indignation and in the gaps in what is not said." J. M. G. Le Clézio, winner of the Nobel Prize for Literature

"With Riambel, Priya Hein has given us a book that should be essential reading for all those who care about our history, in particular the devastating legacy of slavery; but what is extraordinary is that she tells this harrowing story in the most beautiful prose, luminous and musical, drawing in the reader before hitting them hard with the reality of her young narrator's life, and the humiliations and pain she endures because of this very legacy. Today more than ever, this story needs to be told; Priya Hein does so movingly and powerfully." Ananda Devi, author of Eve Out of Her Ruins