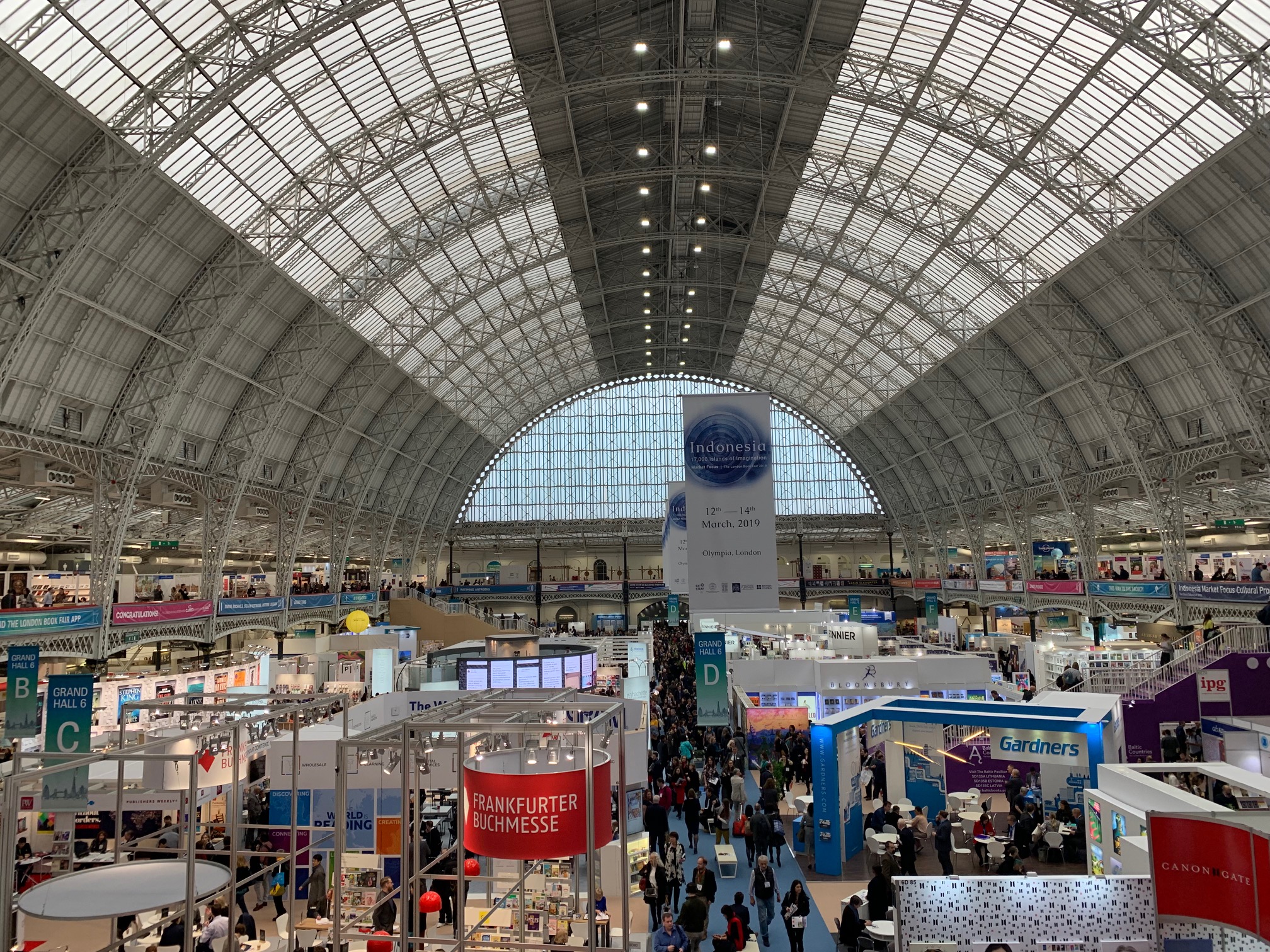 The London Book Fair 2019 took place from the 12th to the 14th of March at Olympia. This time Anna Soler-Pont, Maria Cardona and Madeleine Feeny had as many meetings as possible at the Pontas Agency table in the International Rights Center, but also in the corridors, stairs and lifts, as well as restaurants and pubs, pitching the novels by all the authors represented by the agency.

One of the “hot titles” of the fair was Repentance by debut author Eloísa Díaz. World English rights were pre-empted a few days before the fair started by London-based editor Federico Andornino (in the photo above left) at Weidenfeld & Nicholson. French rights were also pre-empted by Éditions Le Masque/JC Lattès, and Italian rights were pre-empted by Piemme. German and Spanish were also sold very quickly. Above right: Maria and Nathan Connolly with the very first British copies of Karen Havelin's debut novel Please Read This Leaflet Carefully to be published in May by Dead Ink (almost simultaneously with Dottir Press in the US and Cappelen Damm in Norway).

Raffaello Avanzini and Martina Donati from Newton Compton are getting ready to release the Italian translation of The Marriage Clock by Zara Raheem (above left); while Jacqueline Smit and Ingrid Meurs from Orlando Uitgeverij have recently published the Dutch translation of Ayesha Harruna Attah's The Hundred Wells of Salaga.

Book fairs are a good place not only to sell rights but also to introduce or be introduced to publishers and colleagues from different countries we don't know yet. Above right: Jesús Rocamora from Barcelona-based Seix Barral and Cristina Foschini from Milano-based publishing group Mauri Spagnol.

Sensuous Knowledge: A Black Feminism Interpretation is the title of debut non-fiction book by Minna Salami, that will be published in 2020 in several languages, among them Finnish, one of her mother tongues. In the photo above left, Mirjam Ilvas ready from Helsinki-based Schildts & Söderstrom. There are over fifteen publishing houses in the world waiting for Fiston Mwanza Mujila's new novel and London-based Jacaranda Books is one of them! Jacaranda are also publishing Masande Ntshanga's new novel Triangulum in the upcoming months. In the photo above, Valerie Brandes with part of her editorial team.

Every city in the world has its distinct “literary moods and flavours". Anna and Maria felt completely at home on Platform 9 ¾ (from Harry Potter) while waiting for the subway at Baron Court's station before leaving London and its beautiful pink magnolias for Barcelona.