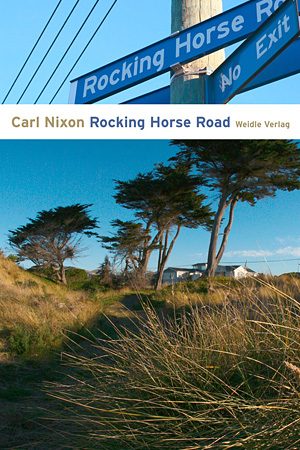 Lucy Asher’s murder makes a huge impact on all those who live along Rocking Horse Road, running through the Spit, a long ‘finger of bone-dry sand’ between the ocean and the estuary. For one hot summer, the event brings together a group of fifteen-year-old boys and then keeps them linked for the rest of their lives.

Evolving from Nixon’s celebrated short story, this powerful novel is much more than an intelligently evoked murder mystery. It is a book about coming of age and loss of innocence, not just for the characters but for New Zealand, as the country turns upon itself during the 1981 Springbok Tour. It examines how early events can influence the rest of our lives, and probes ideas of community, collective memory and story-telling.

“Intensely atmospheric, it strongly evokes 1980s New Zealand—diaries, summer, the beach, teenage boredom and sexual yearning—Rocking Horse Road is also a powerful exploration of maleness, and of grief and the impossibility of articulating grief.” The Dominion Post

“The whodunit is just a small part of what makes this book such a joy to read.” Australian Women’s Weekly

“This is a book of illusions, one of those works crafted by a magician.” The Press

“I enjoyed Carl Nixon’s short stories, so dived into this novel eagerly, and it didn’t let me down—Nixon’s writing conjures vivid pictures of that place and period, allowing the reader to step back into a familiar New Zealand of 27 years ago. While the timing of the story is a growing and turning point for the boys involved, it is also a similar point for the country as a whole. More than that, as the boys grow into men their fixation on the murder remains. To me the book also hints at a subconscious longing in us all for a time when things seemed simpler and more cohesive.” Waikato Times

“Nixon captures well the calculus of suspicion in this type of murder—its circling and descent: the way its mass builds around a man before, with cruel fickleness, it moves on to menace someone else. This, and the parallel he offers between the boys’ trapping and killing of a dog and their revenge on a young ‘Don’t Stand So Close To Me’ teacher, show Nixon to be a writer of talent.” Sunday Star-Times

“Carl Nixon wrote a clever, multilayered and extremely thrilling novel, in which we get to know a lot about New Zealand along the way. He does not establish a causally determined connection between the individual crime and the authoritarian conditions during the 1981 Springbok rugby tour but mirrors the one in the other. In a knowledgeable and subtle fashion, he tells us about a few teenagers, in whom the sense of justice and a restrained sensuality are mixed together into a highly explosive brew. And he provides us with an eventful image of a New Zealand suburb which tries to seal itself off from the big world while, at the same time, everything that is happening in this world is reflected in it nonetheless.” Die Presse