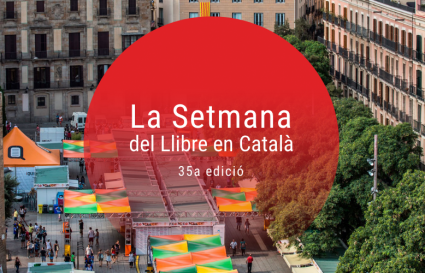 In September 2017, the Catalan Book Fair (La setmana del llibre en català) and the Institut Ramon Llull Fellowship are taking place in Barcelona during the same week for the first time, and it is a great opportunity for international editors to witness and learn more about contemporary Catalan literature. At the Pontas Agency, we’re proud to represent some writers in Catalan language whose literature travels around the world, and to take the opportunity the IRL offers with this fellowship to talk about Catalan writers to international editors.

Furthermore, his new novel published also by Columna in early 2017, Mrs Stendhal (La senyora Stendhal), has already sold over 35,000 copies in Catalan and it's going to be translated into Dutch, German, Czech and Spanish.

Blanca Busquets is one of the most prominent Catalan literary writers, with many novels and awards under her belt. Her most recent success has been The House of Silence (La casa del silenci), published by Rosa dels Vents/PRH in Catalan, and translated into seven languages, including English, German and French. Set between Germany and Spain throughout the 20th century, this romantic page-turner keeps readers guessing until the final revelation, a love letter to seek beyond the grave.

Carme Martí's debut novel, published by Ara Llibres, Ashes in the Sky (Un cel de plom), has become a Catalan modern classic. It tells the story of Neus Català, the last of the Spanish survivors of the extermination camp of Ravensbrück, is the living story of a century and an endless struggle. It was also translated into Spanish (Roca) and Romanian (Meteor). Carme Martí's new novel is coming out in October 2017 also with Ara Llibres: The Colour of Our Dreams (El camí de les aigües) is a highly ambitious novel about women, love, loss and recovery, in which the local flavor becomes powerfully universal.

Lolita Bosch was the winner of the Roc Boronat Literary Award in 2016 with a highly personal novel titled Rage (La ràbia), an intertwined story between her own experience of being bullied when she was a teenager, and the current experience of teenagers nowadays. It also one of the most powerful and universal stories, and a novel for everyone: from teens, to parents, to teachers to anyone who is looking for a poignant and emotional read. Published by Ara Llibres in Catalan, and Círculo de lectores in Spanish.

Maria Àngels Anglada is one of the most important Catalan writers of the 20th Century. A Violin in Auschwitz is a short masterpiece, a touching story that serves as a profound meditation on human dignity and resistance in the face of horrific adversity; it has now been in print for more than 20 years, non-stop, selling over 100,000 copies in Catalan alone and it’s a novel read in all high schools in Catalonia. Furthermore, it has been translated into more than 20 languages. In Barcelona, the city recently paid a homage to Maria Àngels Anglada by naming a beautiful square garden after her.