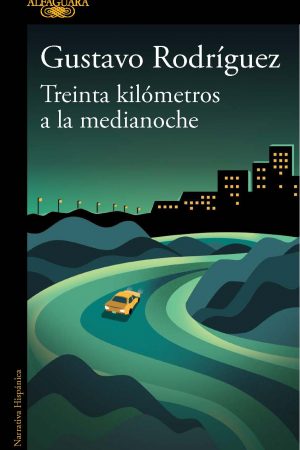 A writer and his partner attend a party in the outskirts of Lima. They both drink, eat, dance and enjoy the night as it slowly turns to dawn. Suddenly, his cellphone rings. A call that no father would wish to receive: a friend of his daughter’s tells him that she’s been in an accident at a club and is currently hospitalized.

Thus starts a road trip that will mark the story’s fast pace. Thirty kilometers at midnight that will trigger a second journey: a journey through the mind of a man in a nervous state whose memories become an existential means of transportation. As their vehicle approaches the city, the reader enters the life of a character who is portrayed through his various past facets—son, boyfriend, husband, lover, friend, father, publicist, and writer—and who evokes a repertoire of stories that trace his evermoving map of affects.

Once again, Gustavo Rodríguez displays his novelistic skills, as well as his ability to weave a plot in which his characters show us, with humor and without complexes, the chiaroscuro of their inner world.

"A journey through the night. A road movie through Lima’s ghettos. A ride through masculinity as if it were an airplane on fire." Santiago Roncagliolo

“The love of a father is an intense trip, fraught with peril. Thirty Kilometers at Mignight is a tender but dark novel, like the journey itself that the narrator embarks on to save his daughter.” Jorge Eduardo Benavides