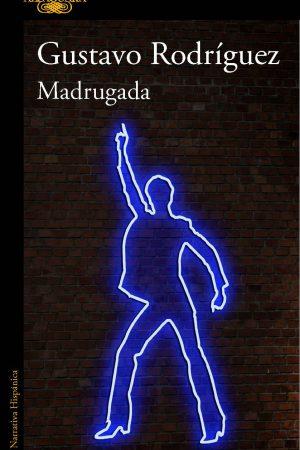 Even though Trinidad Ríos has never met her father, now, at the age of thirty, she must find him. Of course she fears rejection, and fear is an emotion she knows rather well. All her life, since a certain dawn made her an orphan in the Madre De Dios jungle in South Peru and forced her to escape to Lima as a small child, she’s had to fight against people traffickers, illegal miners, and an extremely sexist and racist society.

You could say she’s managed to survive quite well, until now. A severe illness resulting from her exposure to mercury as a child obliges her to search for the only person in the world who might be able to save her. Will her father – a bipolar singer who makes ends meet by impersonating the Bee Gees – accept her? He doesn’t even know she exists.

"Dawn is a powerful novel, gritty, original, written with flair and a great use of the language." Manuel Vilas

"Gustavo Rodríguez has written a musical comedy in which we see the characters swing on a violent and lavish Peruvian dancing floor. (…) Impeccable in his portrait of class and race." Marta Sanz, Babelia (El País)