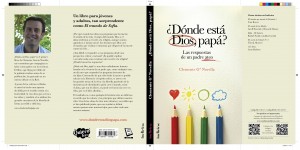 Clemente García Novella created a Facebook fanpage for his first book ever, ¿Dónde está Dios, papá? , the first days of July 2012 following the Pontas advice (he´s a good client!). And two months later he had more than 8,000 fans. Eight thousand four hundred thirty six fans on September 17th, the publication date in its Spanish original language (by Urano). Translation rights have already been sold to Verso da Kapa for Portuguese language and several Italian, French, Brazilian and German publishers are very interested in this title.

Why this book? This is how the author replies in the first pages: “I don’t remember the exact age, but I know that my two children were very young when they asked me for the first time if God existed.  I never had that doubt as a child. I grew up in a religious family. I went to school at a Catholic school. The existence of God was a given, something about which there was no wavering. Of course I believed in a God – the one from the period and the country in which I was born. I didn’t have the option not to believe, just like many children in the world still don’t. For my children, however, there was an alternative; that God didn’t exist was a possibility. Hearing them ask me questions, hearing them doubt, I thought how lucky they were that no one was going to impose their beliefs on them.

I have always tried to honestly answer all their questions about whether or not God exists, without softening my responses. I’ve also tried to make it clear to them that, while my point of view has a rational basis, in the end that’s all it is: a point of view, an interpretation, a way of seeing things from among several possible ways. I’ve always wanted them to know that most of humanity does not have the same opinion as their father and that there are hundreds of millions of people in the world who do believe in one or several gods.

As I am writing these lines, my children are not yet old enough to comprehend many of the ideas about which I am going to talk here, but I hope that, when the time does come when they can understand these ideas, they’ll like these pages. Perhaps these pages might even help them in their lives.

That was the origin of this book. In the beginning, I wanted to put down on paper, for myself, my thoughts about gods and religions so that I could explain it to them better and give them a sensible reply to their doubts. Later, as the paragraphs kept coming out, I thought that in a few years they’d be able to read this for themselves. Finally, I realised that certain adolescents and even some parents might be interested in reading what I was writing. It struck me that there must be many who were probably in the same situation as me: having to respond from an agnostic or atheistic perspective to the questions that are usually answered with the replies offered by religions.”

These are some of the questions Clemente is answering in the book:  Where is God, dad?, Who were the first ones to believe in gods?, Can you prove God doesn’t exist?, So who created the world?, What is the theory of evolution? Does heaven exist?, Does hell exist?, What are religions? How many religions are there?, Is atheism another religion?, Why have so few women been included in this book?