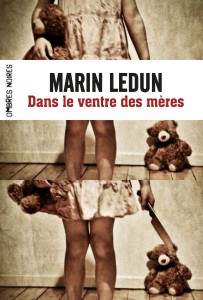 Marin Ledun and Olivier Truc are becoming two big names of the French “rentrée littéraire” in September 2012! Their new novels, Dans le ventre des mères (at Ombres Noires on September 27th) andLe dernier lapon (at Éditions Métailié on September 13th) have been acclaimed since some months ago, when the first journalists and booksellers started reading the proofs. Word to mouth is spreading fast. Both novels have been selected among the five best crime novels of the French “rentrée” by Livres Hebdo-Télérama.

Marc de Gouvenain from the Pontas Agency had the pleasure to introduce both authors last month during the Festival La Canourgue Noire, a picturesque crime fiction festival that takes place in a small village. Marin Ledun was signing his latest novel, Les visages écrasés, and Olivier Truc (who lives in Stockholm) enjoyed the idea of joining the team of French crime fiction writers soon. In the second picture, Olivier Truc and Marc are with Nelly Bernard, publisher of Ombres Noires (Flammarion´s new imprint), who is holding Marin Ledun´s new novel.

Meanwhile, French actress Isabelle Adjani is already talking about the film project adapting Les visages écrasés by Marin Ledun, to be directed and produced by Jean-Paul Lilienfeld! Of course, she would be acting as Carole Matthieu!  And film rights to adapt Le dernier Lapon by Olivier Truc have been sold to Nice Drama Enternainment and translation rights deals have been concluded for several languages already!