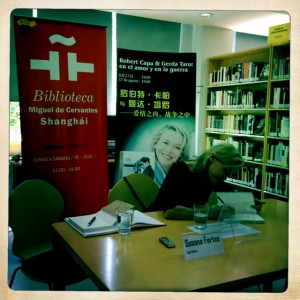 The good news about Waiting for Robert Capa by Susana Fortes continue. Besides having already been published in twelve languages (including English at HarperCollins and French at Éditions Héloïse d´Ormesson), in which is very successful, the author has been promoting the Chinese translation invited by her publishing house, Shanghai 99 (particularly in the cities of Shanghai and Beiging). Her Chinese publisher, Gloria Masdeu (who in fact is a Catalan!) took these nice photos here below.

On August 17th an event was held at the Cervantes Institute of Shanghai under the title “Capa & Gerta: In love and war”, where Susana Fortes could talk about the process of writing her novel; and on August 18th she signed copies at the Shanghai Book Fair. On August 21st, the Cervantes Institute in Beiging organized a dialogue between Susana Fortes and acclaimed Chinese author Hong Ying. And on August 22nd, the screening of the documentary film The Mexican Suitcase was preceded by a talk between Susana Fortes and Clara Zhang (the translator of Susana´s novel from Spanish into Chinese).

Meanwhile, the Hollywood studio Columbia Pictures along with the director and producer Michael Mann (who this year will chair the jury of the Venice Film Festival), continue to develop the film adaptation of Waiting for Robert Capa, whose rights were acquired by Michael Mann from Pontas in 2009. The script is being written by Jez Butterworth. We´ll keep waiting until we can see that story in the big screen!