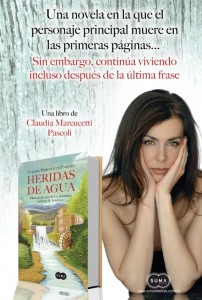 The Wounds of Water (Heridas del agua) by Italian born Claudia Marcucetti Pascoli has been launched in Mexico, published by Suma de Letras, and the media are reacting very positively.

Claudia Marcucetti Pascoli was born in La Spezia, Italy. She moved to Mexico with her mother since she was thirteen. She studied architecture, a profession that held her for ten years until she decided to devote herself to a more creative activity and where she could vent her torments: writing. She has worked for the newspaper Excelsior and Open magazines, Marie Claire and Playboy. She published the story collectionLottery! History of daily raffles and the novel Les Invalides.The Wounds of Water is her latest novel and atPontas we are convinced that this one will reach a wide international audience!

The synopsis: After conquering the legendary Tenochtitlan and founding what become the magnificent city of palaces, Hernán Cortés ordered the construction of the mill of Santo Domingo, one of the first in the Americas. Built on the ruins of an ancient pre-Hispanic temple, the mill became a witness of the secrets, dreams and hopes of those who lived there.

In the nineteenth century, Gioconda Cattaneo, an Italian girl with a rebellious spirit, restless, independent, married to a Mexican Count, travels to Mexico City, which she envisions as exotic, colorful, full of life and fantastic landscapes. When she gets to the mill of Santo Domingo, Gioconda feels to have found the place of her dreams, so she decides to live in it. And there she  dies in unclear circumstances that arouse suspicion. Was it suicide or was it murder? Since then, the ghost of Gioconda takes over the place with more strenght than she did in life, while she tries to clear herself on how her days ended.