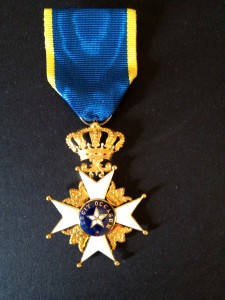 Even if the link between Pontas and Sweden comes from long ago, it was in 2009 when we actively started to represent Swedish authors internationally and it was in 2010 when Marc de Gouvenain, one of the Pontas’ partners, was awarded by the King of Sweden with the badge of Knight First Class of the Order of the Polar Star for his decades devoted to spread Swedish literature abroad. Today, Pontas is representing one of the most successful Swedish authors in the world, Jonas Jonasson, whose first novel, The 100-Year-Old Man Who Climbed Out the Window and Disappeared,  is on top of the bestselling lists in several countries (in Germany alone has already reached 1.3 million copies sold!), it has just been launched in the United States and the shooting of the film adaptation will start in October (directed by Felix Herngren and starring Robert Gustafsson).

Pontas is also representing other Swedish authors with great international potential such as Sara Kadefors, whose new novel, Kast med liten kniv (Never looking back)  has been recently published by Piratförlaget in Sweden and publishers from all around Europe and the United Stated are considering it for their catalogues. While Sara Lövestam ’s two first novels have been acquired by French publishing house Actes Sud and her most recent one, Tillbaka till henne (Back to her) is also being considered by international publishers. Both Saras will be present at the Göteborg Book Fair (September 27-30) and will participate in several promotional events.

Christoffer Carlsson ’s two novels, The Case of Vincent Franke and The One-Eyed Rabbit, have already been translated into six languages by good publishing houses such as De Geus (Dutch), Newton & Compton (Italian) or Gyldendal (Danish). And we are now negotiating a film rights deal to adapt The One-Eyed Rabbit that we hope to be able to announce soon!

Other recent rights sales include the latest novel by Thomas Engström to Bonniers, translation rights ofOnly a Child by Malin Persson Giolito to De Fontein (Dutch) and Belfond (French) and of Butterfly on a Leash by Zinat Pirzadeh to Gyldendal (Norwegian). While we keep working for Mustafa Can and his interesting book Day by Day, already published by Norstedts (Swedish), Modtryk (Danish) and Cappelen Damm (Norwegian).

These days the Tourism Office of Barcelona  has published some figures that show that this last Summer more Swedes have travelled to Barcelona (where Pontas has its headquarters) than to London, Paris or New York, which until now were their favorite destinations for “city breaks”.

The link between Sweden and Pontas goes on!