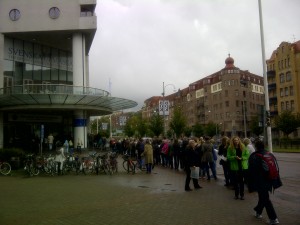 The rainy weather in Göteborg took a breath between Thursday 27th and Sunday 30th September, the dates when the Göteborg Book Fair took place, so the blue sky permitted the authors taking part in theBokmässan to shine still brighter. While hundreds of readers looked for their favourite authors at their publishers’ stands or other stages throughout the fair in order to listen to them and have their books signed, up in one corner of the first floor, at the Rights Centre, a number of international editors and agents exchanged thoughts and impressions about authors and books. Marc de Gouvenainand Patricia Sánchezfrom the Pontasteam had the chance to be there, and they could meet mainly publishers and editors from the Scandinavian countries, but also from Germany, The Netherlands, and even France and Italy.

? With some of them the celebration still goes on about the great success of Jonas Jonasson’s The 100-Year- Old Man Who Climbed Out the Window and Disappearedlike Maren Arzt from C. Bertelsmann, Germany (here below on the left, with Marc), or Nelleke Geel from Signatuur, Netherlands (on the right, with Patricia).

The Pontas Swedish names at this fair were those of Sara Kadeforsand Sara Lövestam. Both Saras took part in different events at the fair, and met readers and followers who took the occasion of the fair to approach them. In between seminars, speeches and book signings, we had the chance to share a good Swedish meal and a really pleasant chat with each of them. In the photos: Sara Kadefors, left; and Sara Lövestam, right.