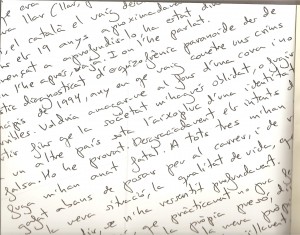 Several years ago, back in 2001, at Pontas we had the chance to read a handwritten manuscript by someone called Andrés Rabadán that until then we only knew through the media. Diagnosed as mentally ill after provoking three train accidents not far from Barcelona (without injuries) and killing his father in 1994, he was imprisoned at 19 years old in a psychiatric jail, where he should remain for twenty years unless psychiatrists would consider that he was no longer a danger for the society.

The stories we read were so powerful that we thought it was worthwhile investing some time typing them in the computer to get a “proper” manuscript and try to find a publisher for it. We spent several hours typing between three people and we finally sold the Spanish and Catalan rights to Deborah Blackman at Plaza & Janés (Random House Mondadori). The book appeared under the title Historias desde la cárcel (Stories from jail).

Andrés wrote another book (The Devi course), not yet published. And then producer Ventura Durall atNanouk Films acquired the film rights of both books: the published one and the unpublished one. He also decided to sign a contract with Andrés Rabadán as co-scriptwriter. In the process of writing the adaptation of the books and thinking about the film, Andrés draw a complete storyboard. That has just been published by Norma Editorial with the same title as the film, The two lives of Andrés Rabadán.

The film, directed by Ventura Durall and with an amazing perfomance by the actor Alex Brandemühl as Andrés Rabadán, was première on December 3rd. And you can watch the trailer here.