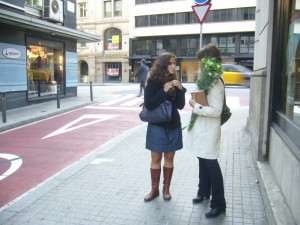 Some days ago, Tatiana Salem Levy visited Barcelona invited by her Spanish publishing house, El Aleph,for the promotion of her novel. And the whole Pontas team could finally meet her after more than one year working for her in the distance!

Tatiana Salem Levy lives in Rio de Janeiro and is one of the most acclaimed authors in Brazil. Her first novel, The Key of Smyrna (A Chave de Casa in the original Portuguese title) has already been published in Brazil (at Record), Portugal (at Cotovia), Spain (this November 2009 at El Aleph) and soon in France (at Buchet-Chastel). We do hope to be selling more translation rights soon! Pontas sold the film rights to Toniko Melo for Circular o Desejo Filmes in Brazil and the script is now being written.

Tatiana Salem Levy (left) and Anna Ascolies (right), who “discovered” her at the Pontas Agency, in the streets of Barcelona.

Winner of the Prize São Paulo of Literature 2008 for the best debut novel and Finalist of the Jabuti Prize 2008, in The Key of Smyrna, the author builds a novel with several voices, by creating a mix of stories that end up in a single account, sometimes strong and heartbreaking, sometimes tender, with a very lively, austere and delicate style. Granddaughter of Turkish Jewish and daughter of exiles from Brazilian dictatorship in Portugal, the narrator receives from her grandfather the key that will open the door of her home in Smyrna, where his grandfather had lived in Turkey. This search for her family’s roots is what determines the beginning of a trip about the quest for her identity. With multiple cultural references, The Key of Smyrna reveals both the richest and the most difficult aspects of the cultural legacy in a family that has known the different faces of the exile.  We have just found this great comment about the novel in a Spanish blog.