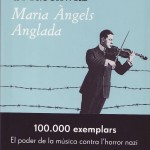 Following the success in selling translation rights of The Auschwitz Violin (to eleven languages so far!), we are glad to announce the recent sale of film rights!!

Maria Àngels Anglada (1930-1999) is one of the most important literary voices of the Catalan twentieth century and one of its most prestigious and widely read authors. She won  many awards and honours. ThePontas Agency became the manager of her rights two years after her death at her daughters’ request and since 2001 the whole team has believed in her work. The results of our efforts started to see the light in 2008.

Published in Catalan in 1994, today The Auschwitz Violin has sold more than 100,000 copies in the original language. Several translation have already been published recently: in Spanish (Destino), in German (Luchterhand/Random House), in French (Éditions Stock, with more than 15,000 copies sold in six months and a pocket edition ready to be launched!), in Italian (Rizzoli), in Greek (Konidaris) and in Portuguese for Brazil (Globo). During this year 2010 the novel will be published in English (Bantam Dell/Random House), Dutch (De Geus), Polish (Muza), Serbian (Dereta) and Romanian (Meteor).

We expect to sell more translation rights in other languages and territories, and especially in Scandinavia and Asia very soon!!

The producer who has acquired the film rights is Sharon von Wietersheim at Rich and Famous Overnight Film Produktions, a North-American producer based in Munich (Germany). They intend to produce a film following the production’s basis of The Pianist by Roman Polanski: totally European production with a European script but shot in English language with Hollywood film stars. Actually Sharon von Wietersheim is writing the script at the moment.

The media are covering such news and several articles have already been published.

What´s The Auschwitz Violin about? Imprisoned at the notorious camp, Daniel feels his humanity slipping away. Treasured memories of the young woman he loved and the prayers that once lingered on his lips become hazier with each passing day. Then a visit from a mysterious stranger changes everything, as Daniel’s former identity as a crafter of fine violins is revealed to all. The camp’s two most dangerous men use this information to make cruel wager. If Daniel can build a successful violin within a certain number of days, the Kommandant wins a case of the finest burgundy. If not, the camp doctor, a torturer, gets hold of Daniel. And so, battling exhaustion, Daniel tries to recapture his lost art, knowing all too well the likely cost of failure.

Written with lyrical simplicity, haunting beauty, and interspersed with chilling, actual Nazi documentation, The Auschwitz Violin is more than just a novel—it is a testament to the strength of the human spirit and the power of beauty, art, and hope to triumph over the darkest adversity. The Auschwitz Violin is a short masterpiece, a touching story that, like the international best-seller bookThe Boy in the Striped Pyjamas by John Boyne, talks about dignity and one person’s resistance in the face of the most terrible adversity.

“A distressing and thrilling fight to survive thanks to art, music, and the ability of hands and the heart.” —Il Giorno

“Readers [will] discover one of the great figures of Catalan literature.” —Livres Hebdo

“A masterwork of delicacy.” —ELLE Magazine