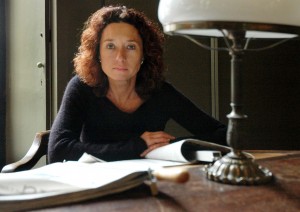 Last January 28th, Maite Carranza won the Edebé Award for  Young Adults Fiction with Poisoned Words (Palabras envenenadas). The novel will be launched within a few weeks in the four Spain’s official languages: Spanish, Catalan, Basque and Galician. Written originally in Catalan, Maite Carranza’s new novel is the story of a fifteen years old girl who disappears mysteriously. This is the story of an action-packed day through the point of view of three people close to the girl: her best girfriend, her mother and a policeman who investigates the case. And this is also a story  of denunciation of sexual abuse against girls in Western societies.

At the press conference of the award, the author admited that the case of Austrian girl Natascha Kampusch was one of the keys that helped her to start writing the novel.

Film rights of Poisoned Words are represented by the Pontas Agency.

Maite Carranza studied Anthropology and worked as a teacher. In 1992, she began to write full time. She has received several awards and has written more than 40 books for young readers. She writes fiction for children and young adults as well as television scripts, while also teaching Scriptwriting at the university.

War of the Witches is her international highly successful trilogy, including: The She-Wolf Clan, The desert of ice and The hate curse. The first title published in English took the general title War of the Witches and it was published by Bloomsbury in the USA and UK in 2008. With more than 100,000 copies sold in Spain, it is a great success in other territories too (being already published in German, Dutch, Italian, Swedish, Polish, Hongarian, Finnish, Chinese, Korean...). This could be certainly a successful film adaptation and the Pontas team is working on selling the film rights!

This magical fantasy delves deeply into the unspoken ties between mothers and daughters and the mysteries of growing up.

What’s the story about?

Anaíd is short for her age, too smart to be popular and, like every other teen, often annoyed by her beautiful and eccentric mother. When her mother suddenly disappears without a trace, Anaíd is baffled. And then she discovers what makes her different: she is a witch. And not just any witch, but the daughter of the chosen one -her mother was prophesied to end a violent war between the Omar witch clan and the bloodthirsty Odish. Now, with the prophecy's time upon them, Anaíd must rise to take her place among her clan. But as she sets out on a journey to find her mother, Anaíd will discover her true powers and fulfill her own unusual destiny --even if it's not what she or the clan expected.