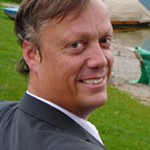 It was the beginning of February 2010 when Pontas became the international agency for Swedish authorJonas Jonasson and his debut novel The 100-Year-Old Man Who Climbed Out Through the Window and Disappeared.  By then, the book was already selling very well in Sweden (published byPiratförlaget). We truly believed in the story and we started international submissions immediately. The main publishers from all around the globe got fascinated by the plot and we received offers for translation rights within a few weeks. Auctions had to be organised when in one same country several enthusiastic publishers wanted to acquire the rights!

This is the story of an old man called Allan Karlsson who is on the verge of celebrating his 100th birthday, but decides to flee from the waiting press by escaping through the window of his old people’s home and from there on we are taken on a journey back through his life involving memorable adventures and historical moments of the 20th Century, including brushes with Winston Churchill, President Truman, Mao Zedong, Franco, De Gaulle, Stalin... with a very special sense of humour difficult to forget!

After a long journey to find an English language publishing house (as it was explained in Publishers Weekly), finally next July 2012 the novel will reach the readers in the UK and Ireland published by Hesperus Press; and next October 2012 in the US and the rest of the world published by Hyperion. There are thousands of hungry English language readers ; mso-fareast-language: ES;" lang="EN-US">In November 2010, the Swedish production companies Nice Entertainment and FLX 2.0 (in a joint venture called Nice FLX Pictures) beat off strong competition from around twenty other companies also competing for the film rights to the book. Respected Swedish director Felix Herngren will direct the project, which is expected to go into production in the Summer of 2012 with Herngren, Patrick Nebout and Henrik Jansson-Schweizer producing. Hans Ingemansson has written a first draft of the screenplay adaptation and the prominent Swedish comedian and actor Robert Gustafsson signed on to play the main character, Allan (in the photo below, director Felix Herngren and actor Robert Gustafsson).

“The novel captivated me from the first page, it is a humoristic masterpiece made to be shot” said Felix Herngren. Disney has acquired distribution rights for Scandinavia, for a planned Christmas 2013 release and several Hollywood studios are already in conversations with the producers for the remake rights.

The sales of the novel are increasing all over. Allan Karlsson is an unstoppable hilarious character. In Sweden alone, sales have reached one million copies. In Germany, seven months after its publication, sales have reached 550.000 copies. In France, Italy and The Netherlands over 130.000 copies have been sold in trade in one year; and a first print run of 75.000 copies of the French pocket edition have been sold in two weeks. It is also a great success in all the other Scandinavian countries, as well as in Spanish and Catalan languages (recently published and already in their third reprints!) and now is starting to become a bestseller in Eastern Europe (sales in Poland and Hungary are being extraordinary!).

The number of awards the novel is receiving is also important.  Besides the prestigious Swedish Booksellers Award, it has also been awarded with the M-Pionier Preis 2011 (Pioneer Prize for New Successful Authors) given by the German bookshops’ chain Mayersche Buchhandlung ; the Danish Audiobook Award 2011, together with « the voice » of Paul Becker ;  the Prix Escapades in France…

For anyone interested, here´s the complete list of international publishing houses who have acquired the translation rights of Alan Karlsson’s adventures so far: