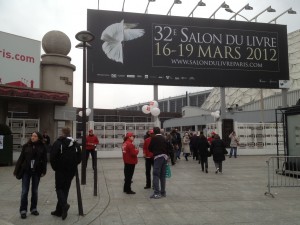 From March 16th to the 19th, Marc de Gouvenain and Anna Ascolies attended the Salon du Livre in Paris on behalf of the Pontas team. The big buzzes this year were the success of manga and the possible acquisition of Flammarion by Albin Michel or Actes Sud. The inauguration was for Marc the opportunity to raise a glass with Frédérique Polet and Jean Arcache (in the photo below) at Presses de la Cité stand to the huge success of the French translation of Jonas Jonasson´s novel (under the titleLe vieux qui ne voulait pas fêter son anniversaire), now released in pocket edition after more than 130,000 copies sold in trade edition in one year.

Staying in Paris for some days after the fair, Marc had a busy schedule and several meetings with publishers at their mythical Parisian addresses in the 6ème Arrondissement. Among so many conversations, he could discuss about the future cover of Le dernier lapon (The Last Sami) by Olivier Truc (to be published by Éditions Métailié), about Marc´s participation in several panels at next Étonnants Voyageurs Festival in Saint Malo (with the literature from the Pacific as focus theme this year), and to talk with enthusiasm about the Pontas rights list and our clients from all over the world.

Meanwhile, Anna Ascolies had her own agenda, mainly around the events in which Brazilian authorTatiana Salem Levy was taking part in (organized at the fair by the Embassy of Brazil and the Fundação Biblioteca Nacional) together with other Brazilian authors such as Arthur Dapieve, Maria Valéria Rezende, Adriana Lisboa, Adriana Lunardi, João Anzanello Carrascoza.

And more interesting locations in the publishing world around Paris: