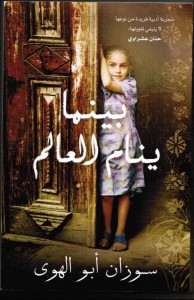 We can already confirm that Mornings in Jenin by Palestinian-American author Susan Abulhawa  is an international longseller. It is here to stay! Originally written in English language, it has already been translated into 23 languages and film rights have been sold (hopefully the story will reach the screens in a couple of years from now). But one of the great achievements arrived some days ago, when finally Susan received a printed copy of the long awaited translation into Arabic language published by Bloomsbury Qatar! This March, Susan will be the protagonist of an important promotion tour in the Middle East that will take her to Qatar, Jordan and Abu Dhabi, among other places.

But what´s the story behind this longseller? It was mid-2008 when Pontas became Susan Abulhawa’s agency with her debut novel, at the time under the title The Scar of David. The novel had already been published by a small American publishing house that went out of business shortly thereafter. But in the meantime, it was translated into French and published by Éditions Buchet Chastel under the title Les matins de Jénine. And it was through Marc Parent, the editor at Buchet Chastel –now turned into a literary agent himself—that Anna Soler-Pont heard of the novel for the first time. So Pontas became Susan’s agency two years after the original publication. From there, and in Susan’s words, “Anna began breathing new life into this novel”. British editor Alexandra Pringle became one of the biggest fans and she acquired World English rights for Bloomsbury. Then, together with Alexandra and the Bloomsbury’s team, thousands of readers, bloggers and booksellers did the rest. At the moment Australia is one of the territories where the novel is most successful in terms of sales.

And who is behind this international success? The entire editorial team at Aschehoug have managed to get Mornings in Jenin to the top of bestselling lists in Norway, with almost 100,000 copies sold in a four million people country. In the photos taken in Oslo, from left to right: Asbjorn Overas with Susan Abulhawa; Gunn Reinertsen Naess, Susan Abulhawa, Anna Soler-Pont and Synnove Helene Tresselt.

Fabio Muzi acquired the Italian rights for Feltrinelli and he has been working hard to get the book to a point where it sells 500 copies per week since several months ago. In the picture, exchanging ideas and his passion in London with Alexandra Pringle. And Susan with Swedish editor Gunilla Sondell atNorstedts, who is celebrating the fact that the novel is now really taking off in Sweden in its pocket edition (and is still in the bestselling lists too).