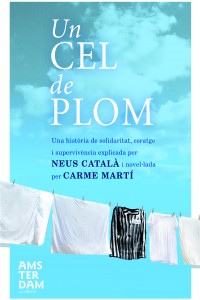 Neus Català's life, one of the last survivors of the Nazi extermination camps of Ravensbrück and Holleschein, is the living story of a century and an endless struggle. Her memories, collected in the form of a novel by Carme Martí with extreme sensitivity and extraordinary intensity, are true life lessons over a story that the reader does not let go. Ashes in the Sky would be the English title for Un cel de plom (in Catalan, published by Amsterdam/Ara Llibres) and Cenizas en el cielo (in Spanish, published by Roca Editorial), already in the bestselling lists right after its publication.

Born into a peasant family of Priorat, in Catalonia, Neus Català was a young woman of twenty-one years old when the Spanish Civil War broke out. In these circumstances, and animated by a deep desire of being helpful, she was appointed the head of a group of 182 children. With them she took the hard road to exile in France where she fell in love and helped the Resistence. She was deported to the Nazi camps of Ravensbrück (Germany) and Holleschein (ex-Tchechoslovaquia), where she found hell but also solidarity and friendship without limits.

"Surrounded by unknown women who suffered the same fate as me, I felt alone and in good company at the same time. In our vast solitude we had each other." Neus says that she survived the horror of Nazi concentration camps because of her moral strenght but especially thanks to the solidarity among her companions. When liberation came, they have promised not to forget. The return to life was not easy. Neus lived in exile in France. One day she decided to ask a photographer to take her portrait with the prisoner dress (see photo above). Not to forget. She could not return home until 1976, after the death of Spanish dictator Franco. At ninety-seven years old, Neus continues to be faithful to that oath and continues her fight for memory.