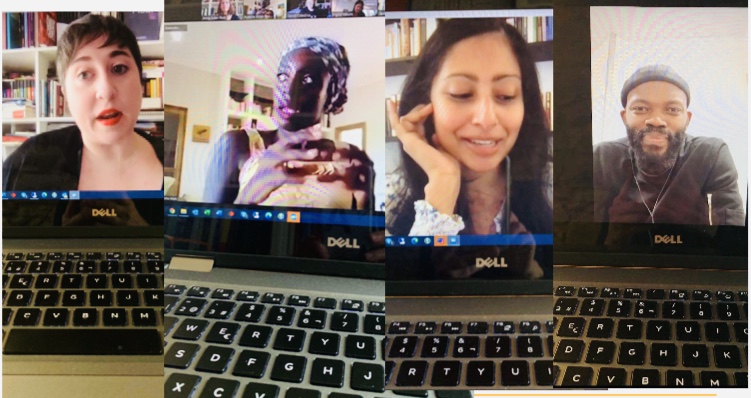 One week ahead of the official virtual “Special Edition” of the Frankfurt Book Fair 2020, the Pontas Agency hosted a series of nine live webinars (on Zoom) with some authors represented and their international publishers or translators to discuss their literary careers and works. All webinars took place between October 5th-9th and were open to everyone who had previously registered. Our main aim was to have editors, scouts, film producers and translators as our audience, but we also got reviewers or people from the media, or just random readers and booksellers who were interested too. We recorded all nine webinars, that lasted between 30-60 minutes each, and those “live” conversations will be kept as a unique document to spread literature around the world. They will be also uploaded onto the Pontas YouTube account.

Avni Doshi (photo above left), now living in Dubai, had a conversation with her UK editor Hermione Thompson (above right) from Hamish Hamilton/Penguin Random House, based in London, about her debut novel Burnt Sugar, currently shortlisted for the Booker Prize 2020 and whose translation rights have already been sold into twenty languages so far.

JJ Bola (above left), living in London, had a conversation with his UK editor Sharmaine Lovegrove (above right), now based in Berlin, about his forthcoming novel The Selfless Act of Breathing, to be published in 2021 by Dialogue Books/Little Brown in the UK and by Atria/Simon & Schuster in the US. It was also mentioned that a Hollywood producer has acquired audiovisual rights to adapt this novel into a feature film (a proper announcement will be done as soon as possible).

Martí Gironell (above left), who lives outside Girona, the ultimate Catalan historical fiction bestselling author, had a conversation with Anna Soler-Pont about his latest novel Paraula de jueu (Word of a Jew), which has climbed up to the top of the bestselling lists and has already been published in Spanish. While Carl Nixon, based in Christchurch, on New Zealand's Southern Island, talked about his new Gothic thriller The Tally Stick with Judith Uyterlinde, who has acquired world English rights outside New Zealand for World Editions.

Ayesha Harruna Attah (above left), based in a village not far from Dakar, in Senegal, had a lively discussion about her forthcoming novel The Deep Blue Between with her original English language publisher Sarah Odedina (above right) at Pushkin Press, based in London, and her Dutch publishers, Ingrid Meurs and Jacqueline Smit at Orlando Uitgevers, based in Amsterdam.

Elena Medel (above left), based in Madrid, saw her debut novel Las maravillas (The Wonders) published on October 7th in its Spanish original language by Anagrama, while translation rights were already sold into seven languages so far. She had a conversation with Maria Cardona and some improvised special guests, such as her Dutch publisher Nelleke Geel at Meridiaan Uitgevers (above right), based in Amsterdam.

Roland Glasser (above left), based in London, shared his experience translating the very first novel by Fiston Mwanza Mujila, Tram 83, back in 2014, and gave his impressions about his latest novel, La danse du vilain (The Villain’s Dance), that he has just began translating from French into English. While North American publisher Will Evans from Deep Vellum Publishing (above right), based in Dallas, Texas, explained what it meant to him to have an author like Fiston in his catalogue.

Anne Assous (above left), based in Paris, is the French publisher at Folio, the massmarket paperback imprint of Gallimard, and she had a conversation with Anna Soler-Pont about Dolores Redondo’s global success and her latest novel La cara norte del corazón (The North Face of the Heart), to be published in French in January 2021. And Eloísa Díaz (above right), now based in Madrid, had a conversation with her UK editor Federico Andornino at Weidenfeld & Nicolson about her debut novel Repentance, originally written in English and already being translated into four languages, much ahead of its publication date.

For more information about any of these authors and their novels, please contact Anna Soler-Pont: anna@pontas-agency.com