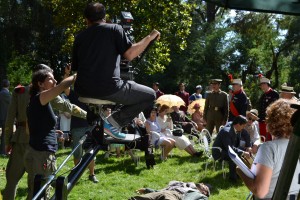 The novel La memoria del agua (The Memory of Water) by Spanish author Teresa Viejo, it´s being adapted into a TV series for Televisión Española, directed by Manuel Estudillo, and produced by BRB Internacional and Pontas, with executive production by Claudio Biern.

Among the main casting are Natalia Sánchez, Tamar Novas, Lola Marceli, Ana Álvarez, Francesc Luchetti and Aitor Mazo. The shooting started last May 23rd and it will continue some more weeks.

The TV series will be full of passion, intrigue, forbidden loves and murders, set in 1927 in the Real Sitio de La Isabela (Guadalajara), which turned into the favorite pleasure place for the Spanish and European high class, with its splendid parties, formal balls, glitz and glamour of the 20s. It disappeared under the waters of the reservoir of Buendía in 1950.

Published in 2009 by Ediciones Martínez Roca/Planeta, La memoria del agua will be translated into German by Pendo/Piper Verlag and into Turkish by Elips Kitap. We expect to sell more translation rights soon.