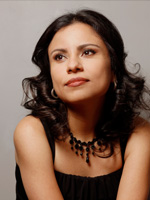 We are very glad to announce that Pontas is the new international literary and film agency of Brazilian author Carola Saavedra considered by the critics one of the most striking voices of today’s Brazilian literary scene.

Carola Saavedra (Santiago de Chile,1973) lives in Brazil since she was three years old. She also lived in Spain, France and Germany, where she completed a Master's Degree in Communication. She currently lives in Rio de Janeiro and she works as a translator and a writer. Among her works are Flores Azuis (Blue Flowers), 2008, chosen best novel by the São Paulo Association of Art Critics and finalist of the São Paulo Literature and Jabuti Awards; and Paisagem com dromedário (Landscape with Dromedary), 2010, winner of the Rachel de Queiroz Award as Young Author. All her novels have been published in Brazil by Companhia das Letras.

About Landscape with Dromedary:

Auto-exiled on an anonymous volcanic island, Érika tapes messages on a recorder addressed to Alex. In the 22 recordings (chapters), she tries to rebuild her past and the profound relationship she had with that man.

Carola Saavedra radically upgrades the epistolary genre. The originality of her writing, already celebrated in her first two novels, makes the critics consider her one of the best values of Brazilian literature.

She is one of the few female finalists of the two major literary awards in Brazil. Landscape with Dromedaryis among the 10 best books listed by the São Paulo Award and among the 50 of the Portugal Telecom Award of Portuguese literature..

All translation and film rights are available.

We are glad to remind you that Brazil will be the Guest of Honour of the Frankfurt Book Fair 2013and, together with Carola Saavedra, in Pontas we are happy to represent Tatiana Salem Levy, another excellent Brazilian author. Her first novel The Key of Smyrna, winner of the São Paulo Literature Award (debut novel) and finalist of the Jabuti Award in 2008, has already been published in Brazil, Portugal, Spain, France, Italy and Turkey. She is now finishing her second novel Dois Rios (Two Rivers) which will be published in Brazil next fall 2011 by Record.