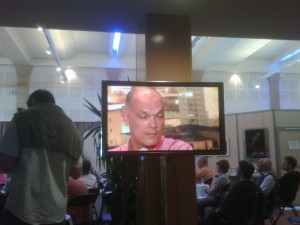 On the 11th and13th of June 2011, Marc de Gouvenain attended the Festival Étonnants Voyageurs in Saint Malo (French Brittany) for its 21st edition, not one missed by Marc when a publisher, his second asPontas. With the years, Étonnants Voyageurs has become probably the best book festival in France, gathering dozens of writers from all over the world for three days of intense panels, discussions and friendly encounters. Add to this more than a hundred films or documentaries, fantastic exhibitions… and Saint Malo itself.

Marc could not only enjoy the wonderful town by the sea but strengthen his contacts in the French and international publishing community, hear about good books, discover writers, and enjoy some time with old friends of his.

Étonnants Voyageurs, as other important meetings of the book branch here or there in the world, means regular exchanges of views, openings on cultures one rarely hear about, meeting face to face people one regularly contacts by mail and going back home full of a renewed enthusiasm for literature and more generally culture.

For Pontas, attending such events means a lot, as the literary and film agency has of course a role to play in the middle of the whirl.

Danielle Laurin, writer and journalist at Le Devoir in Québec with publisher Asbjorn Overås from Aschehoug (celebrating the big success of Mornings in Jenin by Susan Abulhawa in Norway!); A panel on “La Ville-Monde” with Danielle Laurin, Dany Laferrière, Maylis de Kerangal and Stanley Pean.