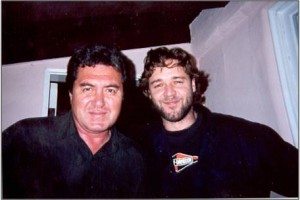 Alan Duff is back with a new novel and Pontas is happily representing this wonderful Maori author, one of New Zealand’s most outspoken personalities. Marc de Gouvenain, now agent and partner in Pontas, used to be Alan Duff’s French editor at Actes Sud and knows his work well. While Anna Soler-Pont will always have great memories of the “Maori film project” that she negotiated with Castle Rock at Warner Bros, in which Russell Crowe, the actor born in New Zealand and with Maori ancestors, was involved. The film was never produced, as it happens with so many projects in Hollywood, but the script written by Alan Duff is there, and we never know! (here below a photo taken by Anna of the two of them in Los Angeles in December 2000).

Born in 1950 in Rotorua (New Zealand), Alan Duff is a Maori author of Ngati Rangitihi and Tuwharetoa descent writing in English. He is an award-winning novelist and the author of New Zealand’s best-selling novels (Once Were Warriors, One Night Out Stealing, What Becomes of the Broken Hearted?, Both Sides of the Moon, Dreamboat Dad, among others), two of which have already been adapted into movies with his own screenplays. He is a full-time writer and now lives in France.

About Captains and Cannibals in Alan Duff’s words:"This is a story set in the 18th century, a time in history when nations in Europe were striving to outshine each other. And a remote South Pacific land that seethed with tribal warfare and the practice of enemies eating each other. Yet a magnificent nobility to them. And nor are the Europeans exempt from barbarism. It is a story of exceptional captains of the sea discovering new lands and peoples. And a warrior called Tokanui Te Neho. This was a challenging book to write because it is such a departure from anything I have written, a historical novel. I am a huge fan of the French explorer, La Pérouse. He was a true hero. Like many people I am fascinated by the French monarchy not least Marie-Antoinette and her husband, the sad Louis XVI. And of course being of Maori origin I know well of my ancestors' gruesome cannibalism, their magnificent sense of warriorhood. It is a tale of a noble warrior and various characters of the French nobility, as well a little insight to the great Captain Cook. It is a true slice of history in fictional form, including, ultimately, the erupting Tarawera Mountain destroying the famous Pink & White Terraces, as predicted by a Maori priest prophet."

Who was La Pérouse? Jean François de Galaup, comte de Lapérouse (1741–1788?) was a French Navy officer and explorer whose expedition vanished in Oceania. La Pérouse set sail from France in 1785 to continue the discoveries of Captain Cook, whom he greatly admired. He was shipwrecked in 1788 but his narrative, maps, and views survived and were later published. Ships were sent to Oceania in the early 1790s to look for La Pérouse and a further illustrated record followed.