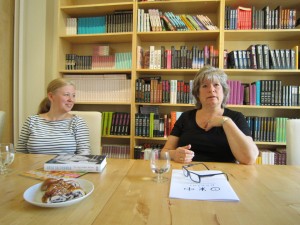 From June 20th to the 24th -an unfortunately wet Midsummer-, Marc de Gouvenain, partner and agent atPontas, was in Stockholm. Nothing new as his functioning as a link between Sweden and France began already in 1969 ! Still, Stockholm remains one of his favorite towns in the world, a place where, every time he goes, he takes some minutes admiring the statue dated 1489 of Saint George in Storkyrkan. These days were the opportunity to pay a visit to publishing houses like Piratförlaget, Bonniers, Norstedts and the young Sekwa Förlag with its interesting list of francophone women writers that Pontas could lengthen sooner or later. A free discussion with Lasse Winkler, redacteur-in-chief of SvenskBokhandel, is always interesting to feel the pulse of the book branch in Sweden. Magdalena Hedlund, the many years old friend who now has started her own literary agency, was not forgotten; neither Yellow Bird production film company who could, why not, be one day interested in the works of some Pontas clients. And, rightly, first of all the visit was planned to meet some authors represented internationally by Pontas such as Sara Lövestam and Christoffer Carlsson. Life stories, literary tastes, ideas on society and future works were on the menus.

In the photos, from left to right: Sofia Brattselius-Thunfors and Ann Marie Skarp at Piratförlaget; Marc and Magdalena Hedlund.

Norstedts famous building on Riddarholmen; and Marc with Sara Lövestam.

Lasse Winkler at SvenskBokhandel office; and Saint George at Storkyrkan.