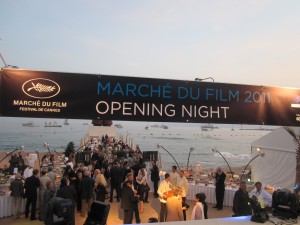 Jérôme Paillard, director of the Cannes Film Market – Marché du Film, wrote in the website of this year’s event: “From 11 to 20 of May, you will meet, discover, trade, negotiate, buy, and sell... During those ten days you and your colleagues will determine the future direction of the film industry. The Marché du Film is the biggest event in the international film industry and a unique opportunity to further your projects.” And we are copying his words here to confirm  that he was right once again!

The Pontas team was represented at Cannes this year by Anna Soler-Pont, Carina Brandt and Marc de Gouvenain. Our line-up was varied and full of projects in which we really believe. Meetings  with possible co-producers, buyers from distribution companies, talent agents, lawyers, financiers, film commisions representatives and friends from the film industry took place, as usual, in the most different spots around Cannes: from the Pontas (mini) stand at the Palais to the appartments and hotel suites at La Croisette, from terrasses by the beach to terrasses at the hotels.

Producers from all over the world were also approached by the Pontas team about the next Frankfurt Sparks that will take place on 12 and 13 October at the Frankfurt Book Fair to bring together the content rights holders with producers, in a unique world’s first all-media content promotion platform. Britta Friedrich, Director of Creatives Industries for the Frankfurt Book Fair, was also in Cannes meeting with film professionals and journalists. (in the picture, recording an interview for SydneysBuzz with Sydney Levine).