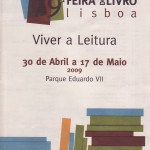 The Feira do Livro de Lisboa is the most important book fair and publishing event that takes place in that wonderful city every spring. This year it was its 79th edition and Brazil was the guest of honour. Organised as an open air fair at the Eduardo VII Park, 250 exhibitors and 140 publishing houses were present and participating in the programme.

Brazilian author Tatiana Salem Levy was there invited by her Portuguese publisher, André Jorge from Cotovia, and she could sign copies of her novel A Chave de Casa to her readers. With this novel she won the São Paulo Award in 2008 and, through the Pontas Agency, translation rights have already been sold to France (Buchet-Chastel) and Spain (El Aleph) and film rights to Toniko Melo for Circular o Desejo Filmes in Brazil.

This novel « establishes Salem Levy as one of the main Brazilian writers of the 21st century », wrote Renato Pompeu for Diário do Comércio, in São Paulo. « A novel praised by the Portuguese critics as one of the renovating texts of the Brazilian literature», said Antonio Gonçales Filho for A Gazeta, in São Paulo.

Anna Ascolies (right) went to Lisboa from May 7th to 10th to visit the book fair, have several interesting meetings with publishers in their offices and, above all, have the chance, at last, to meet with Tatiana (left) for the first time!