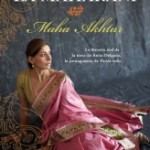 The Maharani’s Hidden Granddaughter  , the memoir and very first book by Maha Akhtar, was published at the end of April in Spanish as La nieta de la maharaní, as a “world’ s première” and before being published in any other language. The Spanish publishing house, Roca Editorial , invited Maha to promote the book in Barcelona, Madrid, Sevilla and Málaga. With a first print run of 25,000 copies distributed, while the promotion was still going on, a second print run was ordered...

Maha Akhtar is a contributing editor for Departures Magazine, part of the American Express Publishing Group and she is also a columnist for The Times of India. After having been production assistant of The Cure, Maha worked for CBS News in New York from 1993 until 2006. In 2000, she became Dan Rather’s Chief of Staff and collaborated with Rather on all of his public speeches and other writings. She wrote and produced his daily radio commentary and collaborated with him on many of his books. Maha Akhtar divides her time between New York, Sevilla and New Delhi and she speaks six languages. In addition, Maha is a professional flamenco dancer and danced with the Compañía Manuela Carrasco in a combination of Indian khatak and flamenco, proving that both arts share the same roots.

Spanning a century, Maha’ s book tells the story of how she accidentally stumbles upon the discovery of her Indian and Spanish ancestry and at 42 she realizes she is the granddaugther of Ajit Singh, Maharaja of Kapurthala, and Anita Delgado, a flamenco dancer who became an Indian princess. Moving across Europe, India and the Middle East, the story focuses on four strong women, Anita, Laila, Zahra and Maha, whose destinies become intertwined because of a love affair that took place in London in 1964...

Among so many interviews appeared in different Spanish media, we choose the one on Informativos TeleCinco by May Gañán , the journalist who recommended Maha to approach the Pontas Agency and to whom we are really thankful!

From left to right: Anna Soler-Pont, Maha Akhtar and May Gañán before this interview was filmed.

From left to right: Martina Torrades, Anna Ascolies ,  Maha Akhtar and Joachim De Nys in a picture taken at the Pontas’  offices.

Translation rights of The Maharani’s Hidden Granddaughter have already been sold to Goldmann/Random House (German), Hachette India (English for India only), Primavera Editora (Portuguese for Brazil) and Shanghai Press (Chinese). And of course to Roca Editorial (world Spanish). Several publishers and film producers from all over the world are reading the book and we look forward to receiving more offers soon!!