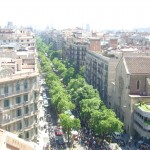 Saint George's Day is celebrated by several nations, kingdoms, countries and cities around the world, from Ethiopia to Albania, from England and Gemany to Beirut and Barcelona… Saint George's Day (Dia de Sant Jordi) is one of the most important feasts in Catalonia and it is traditional to give a rose and a book to the loved one. This tradition inspired Unesco to declare it the International Day of the Book, since April 23rd was also the date of the death of William Shakespeare and Miguel de Cervantes. And we would add, also of Maria-Àngels Anglada.

Every April 23rd, Barcelona becomes a huge open air bookshop and the entire population of the city, literally, is out in the streets buying books and roses and queuing to get their favourite author’s signatures. There are more and more authors and publishers from all over visiting Barcelona on Sant Jordi and staying for the various parties organised in the city by publishers and literary agents before and after that special day.

Lluís-Anton Baulenas won the Sant Jordi Award 2008 with his novel The Nose of Mussolini and he spent the entire day signing to his readers.

Blanca Busquets signed copies of her latest novel Who Knows Where the Sky is , published in Catalan and Spanish and German rights already sold to DTV Verlag.

Neus Arqués  signed copies of A Woman in Your Position and she attended the media very professionally as always (she appeared on minute 98 of España Directo’s programme in TVE interviewed by Enric Company).

And Judit Mascó  also spent the day taking a taxi from one side of the city to the other, accompanied by her editor Gemma Moraleda, and signing her new book Modelo.

Two colleagues agents: Pau Centellas (left, from the Silvia Bastos literary agency) and Kylee Doust (who was in Barcelona with “her” best-selling Italian author Federico Moccia).

And two publishers working in between book signatures and literary events: Miguel Aguilar (left) and Claudio López, both from Random House Mondadori.

Before Sant Jordi’s Day, most of us (professionals of the publishing industry) attended the London Book Fair and arrived to Barcelona just on time for the previous parties.

And two days after, on Saturday April 25th, took place the Drac Party, organised by a varied group of publishers and agents, with more international guests every year. Joachim De Nys and Martina Torrades from the Pontas team were there and here you have a collection of pictures.