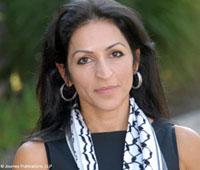 We are glad to announce that The Scar of David, the first novel by Palestinian author Susan Abulhawa, will be published by Bloomsbury in 2010!  After having been published already in the US by Journey Press, the rights have reverted to the author and she will be able to make some revisions before this great publishing house, known all over as “the Harry Potter’s publishers”, will launch it again with all its strenght.

The Pontas Agency just concluded a good deal with Bloomsbury for World English rights in all territories as well as for Arabic rights, since the company is also expanding and will be opening Bloomsbury Qatar soon! At the moment, the Bloomsbury Group includes, among other imprints, Bloomsbury UK, Bloomsbury USA and Berlin Verlag in Germany. In Canada, Bloomsbury is distributed by Penguin Canada and in Australia and New Zealand by Allen & Unwin.

We are sure that Susan Abulhawa’s novel will become a great success once published by Bloomsbury. One of the company's greatest skills has been its ability to identify new authors, and using aggressive sales and marketing skills to publish their books successfully. This has been demonstrated over the years with authors such as Michael Ondaatje (The English Patient), David Guterson (Snow Falling on Cedars), J.K.Rowling (Harry Potter’s series), Khaled Hosseini (The Kite Runner) and Anthony Bourdain (Kitchen Confidential). Meanwhile, for readers in other languages: the novel is already published in French as Les matins de Jénine (by Buchet Chastel); in Dutch is Het litteken van David (by De Geus), in Italian is Nel Segno di David (by Sperling & Kupfer Editori)… All Scandinavian languages rights as well as film rights are still available. And there is a lack of films focussing in that part of the world! More information about Susan Abulhawa and her novel here.