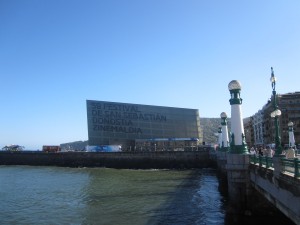 When I saw you (Lamma Shoftak), the second feature film by Palestinian writer, director and producerAnnemarie Jacir (still in post-production), was selected for Cinema in Motion at the San Sebastian Film Festival 2011. Cinema in Motion was open (for the seventh edition) to filmmakers from the developing Arab countries and Portuguese-speaking African countries. On September 19th, the four selected directors had the chance to defend their projects before professionals from all sectors accredited at the Industry Club within the Festival. Annemarie Jacir was able to talk about her new project and show 45 minutes of “work in progress”. The screening was a success and we all hope that a first rough cut will be ready by the end of this year!

From left to right: the Kursaal building, where most of the Festival’s events take place; Jane Williams (director of Film Connection & Film Forum at the Dubai International Film Festival, Anna Soler-Pont and Annemarie Jacir.

About When I Saw You: It’s late 1960’s and the world is alive with change. Tarek, 12, and his young mother are among the latest wave of Palestinian refugees to arrive in Jordan. With difficulties adjusting to life in a refugee camp, Tarek searches for other ways out. Eventually his free spirit and curious nature leads him to a group of people who will forever change his life. A journey full of humour and adventure, but mostly that moment in a person’s life when he wakes up, when the whole world is buzzing and everything is possible. Anna Soler-Pont  and Ricard Domingo from the Pontas team attended the event and were supporting Annemarie Jacir. Besides, they met with several producers interested in books to adapt and took the opportunity to catch up with old colleagues from the film industry.