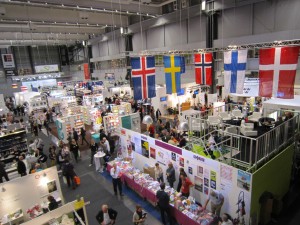 On September 22nd-25th, Carina Brandt and Marc de Gouvenain from the Pontas team attended theGöteborg Bok Mässan (Gothenburg Book Fair). This important Swedish cultural event is catching the interest of many publishers from France, Germany, Holland, Italy and other countries interested in what’s going on in Scandinavia and brings the opportunity to have meetings with literary agencies like Pontas, who have good tips on good books two weeks before the Frankfurt Book Fair. (In the pictures below, a view of the fair and Carina Brandt and Francesca Varotto, Italian editor at Marsilio).

Carina and Marc could hence talk about Pontas strong list of authors, and mention that a number of titles presented last year had since found a publisher – like Swedish authors Malin Persson Giolito and Sara Lövestam (soon to be published in France, one by Belfond and the other by Actes Sud). And of course, enjoy and celebrate with friends in publishing the international success of Jonas Jonasson’s novel, The 100-Year-Old Man Who Climbed Out the Window and Disappeared, finally to be published in English language in 2012 (by Hesperus Press in the UK and Ireland and by Hyperion in the US and rest of the world).

The accent was put this year on Pontas’ new clients from Brazil and France and the names of Joao Almino, Olivier Truc   or Emmanuelle Urien, among many others, were often in the conversations. In the photos below, Christoffer Carlsson on stage at Pirat Förlaget stage; and Sara Lövestam with Carina and Marc.