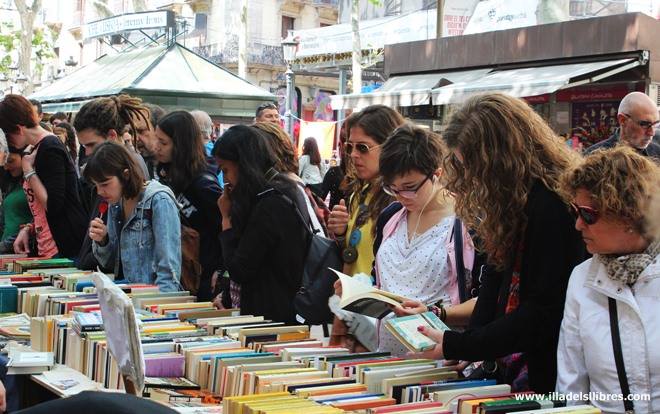 Once again, on April 23rd , Barcelona became the capital of books and roses! During the International Book Day, hundreds of authors signed their works to their fans and readers; booksellers were happy on a very sunny day; journalists run up and down to cover so many stories going on; and tourists were amazed to see such a spontaneous show around the pleasure to buy books and roses in the streets.

This year, we have organized a casual Pontas International Networking, inviting to join us in Barcelona three of our clients who had never visited our offices before and didn´t know the entire Pontas team yet (Swedish author Sara Lövestam came from Stockholm, Ghanaian author Ayesha Harruna Attah came from New York and French author Emmanuelle Urien came from Toulouse). As well as three publishers with whom we had some recent important deals and hadn´t visited us before either: Maren Artz from Munich-based Carl’s Books/C.Bertelsmann, Marie-Pierre Gracedieu from Paris-based Gallimard andLaura Deacon from London-based HarperCollins UK. It was a pleasure to spend time all together, sharing ideas, introducing one another, also to Catalan and Spanish authors, publishers, scouts or journalists. In the photos below: the Pontas team with all the visitors and the three authors (Ayesha, Emmanuelle and Sara) after a great a paella by the beach.

The most sold book of the day in Catalan language and the second most sold book in Spanish was The Analphabete Who Could Count by Jonas Jonasson, published by La Campana and Salamandra by agreement with Pontas Agency. It was fun to see an actress signing copies of the novel as Nombeko, the main character. The Invisible Guardian by Dolores Redondo was also among the ten most sold books in Spanish language and the number of readers willing to have her signature doubled the ones she had last year.

On April 24th, Pontas office’s doors were open again for our “Post-Sant Jordi Breakfast”. A nice group of publishers, authors, scouts, translators and journalists came to Sèneca street to share the best moments of the previous day and to enjoy a casual international mingling-networking with croissants and roses. In the photos below: a “Pontas cake” baked by Maria Cardona and Virginia Marx, Jessica Craig and Laura Deacon.