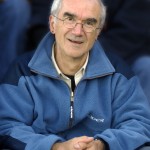 Next July 2009 the Pontas Agency will enlarge the activity in Scandinavia and the Pacific after an agreement concluded with Marc de Gouvenain.

Marc lived and worked some years as a teacher in Sweden, Ethiopia and Morocco and since 1969 he has translated more than seventy novels from Swedish into French (also some from Norwegian). He has alternated translations and publishing with activities as a cultural travels' guide in Yemen, Ethiopia, Mongolia and the Solomon Islands, amongst other destinations. Marc has been finding good Scandinavian and Pacific literature as an editor for the French publishing house Actes Sud, besides being an author himself.

He had the privilege to be one of the first ones to read the manuscript of the Millennium trilogy by Stieg Larsson. He bought the rights immediately for Actes Sud and he translated himself the three volumes from Swedish into French… After the great success of those novels (more than three million copies sold in France!) he has decided to start a new career as an agent to represent authors from Scandinavia and the Pacific all over the world, both for publishing and film rights. And to continue with his favourite activity: travelling, reading and promoting literary voices yet to be discovered, but now from Pontas!

As many international media have explained, Marc de Gouvenain has a lot to do with Stieg Larsson’s success all over and we are more than thrilled to be working with him.

For this new adventure, the Pontas team will also count with the daily collaboration of Carina Brandt. A Swedish living in Barcelona since several years ago and having a good knowledge of the publishing and film industries from the inside, in her own words: “for the first time in all these years I will have the opportunity to synchronize my Swedish roots with all the literary cultures in the world”.

Pontas is already reaching agreements with several Scandinavian agencies and Pacific publishers, so we´ll be able to represent some selected titles in different territories soon. For instance, we have concluded a deal with Polynesian publishing house Au Vent des Îles based in Papeete (Tahiti) and we are starting to work for their fiction authors such as Moetai Brotherson (in the picture, behind Marc, wearing a red shirt) and Chantal Spitz  (in a picture taken by Marc in her motu in Huahine).