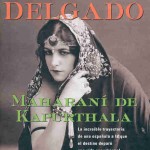 The Pontas Agency just concluded a deal to sell audiovisual rights of Anita Delgado' s biography, written by Elisa Vázquez de Gey and published by Planeta in Spanish (Piper Verlag in German and Hemkunt Press in English for India). This is the fourth time the Pontas Agency is selling those rights in ten years… but given the complexity of the project, the film was never produced and the rights were reverted to the author. But it seems that this will be the last one! The agreement has been reached with BRB International for a TV series of seven episodes about Anita Delgado’s life (in co-production with TVE-Televisión Española and other international TV channels).

Although it seems to come out from a romantic novel, the life of Anita Delgado is a true story: Anita was a sixteen years old girl who came to Madrid from Málaga running away from poverty. In May 1906, while she was performing as a flamenco dancer, she was sighted by the Maharaja of Kapurthala, who was in Madrid on the occasion of the marriage of King Alfonso XIII of Spain to an English princess. After a whirlwind courtship, Anita became Princess Prem Kaur of Kapurthala, a title she maintained, despite her rocky relationship with the Maharaja, until her death in 1962.

By coincidence, Spanish writer Elisa Vázquez de Gey met a woman in 1988, who introduced herself as the niece of Anita Delgado. Fascinated by this unique story, Elisa started an enormous research following Anita Delgado's footsteps all the way to India. The result was a book first published in 1998 and  taken from diaries, memoirs and personal correspondence, completed with original photographs. Ten years later, a second edition with more information and pictures was published. Elisa Vázquez de Gey’ s book offers a fresh look at colonial India and late nineteenth century Europe and the most complete biography existing on Anita Delgado. Besides selling the rights of the book as the basis for the TV series, Elisa will be the consultant and co-screenplay writer.