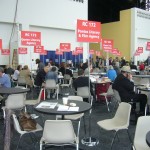 Amid a global recession, decreasing book sales in the United States and industry-wide layoffs, theBookExpo America 2009 (BEA) took place in New York from May28th to 31st. The Pontas Agency had a table at the International Rights Center, where Anna Soler-Pont arranged a good amount of interesting meetings preceded by many other meetings at the publishing houses and literary scouts’ offices around Manhattan the days before the fair started.

Now that the BEA 2009 is over, the conclusion would be that the US publishing market is more closed than ever to translations and that 95% of American publishers are only interested in books originally written in English. Basically because is the only language they are able to read (compared to European and Asian publishers, for instance!) and/or because they want to avoid translation costs. Even if from Pontas we do often provide them with English sample translations, when they can’ t read the entire book by themselves it’s difficult to catch their attention.

So, most of Anna’s meetings ended up talking about the works by Tim Parfitt, Parvati Nair, Sirisha Herat, Jeremy Ames, Armin Wandrewala and Maha Akhtar.

Among other agreements reached during the BEA, from now on Pontas will be representing the Helen Zimmermann Literary Agency in all European territories and Brazil, adding this newyorker agency to the clients list.

New York was also the meeting point to catch up with three Pontas authors, which is always nicer than non-stop emails and phone calls.

Susan Abulhawa has been busy editing her novel The Scar of David  following the advices of Anton Mueller at Bloomsbury  and it will be published in the US and UK at the beginning of 2010. Translation rights have already been sold into 15 languages.

Maha Akhtar was ready to fly to Spain again to continue with the promotion of her memoir The Maharani’s Granddaughter (if you google her name you will find dozens of articles and interviews in Spanish). At Pontas we are now discussing film rights offers while translation rights have also been sold in Germany, Brazil, China and India.

And Antonio Lafuente, a new author we really believe in, is working on his novel and we are willing to get it finished soon! Here below you can see the view from Antonio’s desk and you will agree that he has no excuse to find inspiration!!