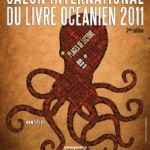 This year, SILO was exceptionally set for two days in Nouméa before rejoining its usual base at Poindimié, in the Northern province. Organised every two years, this international book fair gathering writers from all over the Pacific gains in importance and has become a must "down there", a unique event where the “Francophonie” meets the Anglosaxon world. Marc, present since the first edition of the festival in 2003, because at that time he was the French publisher of writers such as Alan Duff, Sia Figiel or Alexis Wright, and regularly a moderator in the panels, is often referred there as the "godfather of the SILO".

In April 2012, the focus of Saint Malo book festival in France will be the South Seas, and Pontas, representing several writers from the Pacific region, directly or on behalf of a publisher (Au Vent des Iles) has already developed an efficient network in the Antipodes, an immense and rich literary territory, often totally unexplored, that should interest many publishers. Here below, Marc de Gouvenain with Nicolas Kurtovitch and Michael Robotham; and Ingrid Astier signing.

Back in France and still dizzy from the jetlag, Marc de Gouvenain attended the eight edition of Festival Paris Polar.This festival, limited to the noir genre, proposes not only debates but exhibitions, films and investigation games. Marc participated in a round table on Crime Fiction in the Nordic Countries and had the honour to share the microphone with Arni Thorarinsson from Iceland (in the photo). The recent wave of Nordic crime cannot hide that France has also very good confirmed crime writers, see in Pontas listIngrid Astier or Marin Ledun, among others!