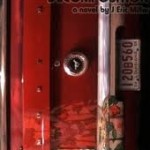 We are glad to announce that four new authors from four very different backgrounds such as the United States, Sweden (with Kurdish origins), Spain and Argentina have signed up with Pontas recently for international representation. Every time we start representing someone we have the same feeling as if we were starting a long journey by land across several countries or even continents. We know where we want to go, but we never know how long it will take and what will we find in between.

Jason Eric Miller  grew up in the mountains of Colorado and Montana and has also lived in California. He has been a professor of Creative Writing since 2000. His book length publications include novels and short stories. Decomposition, published by Ephemera Bound Publishing (USA) and Éditions du Masque (France), is a road trip with a caveat. At the heels of our protagonist? Hurricane Irene. In the trunk of her car? The boyfriend she’s bludgeoned to death but can’t quite leave behind. Somewhere over the horizon? The man she once abandoned and to whom she means to return. Between her and him? 1,500 miles of dark American asphalt, along which the corpse and her mind will continue to decompose, while the fairy tales she’s been fed wither, one after the other.

Mustafa Can was born in the (Turkish) Kurdistan in 1969. As a child he immigrated with his family to Sweden. He is a multi-awarded essayist and journalist who writes for major newspapers and magazines in Scandinavia. He has also hosted television programs for SVT and TV4. His debut novel, Day by Day – The Story of my Mother, was published in 2006 and received great reviews from the press and was sold in more than 100 000 copies in Sweden. This testimonial novel turned into one of the finest portraits ever made on a mother; a gripping, timeless story about his mother's life and death. But, it also examines exile, alienation, homelessness and other big questions of our time. Mustafa Can is currently writing a novel that deals with memory, myths, exile and identity.

Carmen Santos was born in Valencia (Spain). She lived in the German city of Düsseldorf from the age of four until she was sixteen. She currently lives in Zaragoza (S