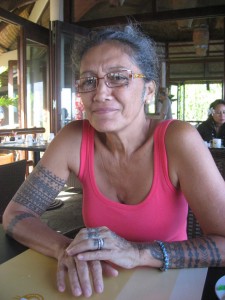 Marc de Gouvenain attended the 9th edition of the Polynesian Book Fair in Papeete,  Tahiti’s capital, on behalf of Pontas and was invited to participate in several events of the programme “Lire en Polynésie 2009” from November 26th-29th. This book fair was launched in 2001 as an initiative of the Association of Publishers from Tahiti and the Islands and the support from public and private partners. The main goal was to get together everyone involved in the promotion of books in Polynesia. Given the great success of the audience, the event has been growing year after year and today it’s a fair that wants to be an “intra-Pacific networking platform” for writers, agents, publishers and readers.

This year the fair took place in the gardens of the Maison de la Culture – Te Fare Tauhiti Nui in Papeete and the number and quality of authors participating in the programme was very important. Besides Polynesian literary voices such as Chantal Spitz and Moetai Brotherson (represented internationally by the Pontas Agency on behalf of Éditions Au Vent des îles), also included voices from New Caledonia, New Zealand, Samoa and Australia. In the pictures below, from left to right: Chantal Spitz (from Polynesia); Chantal Spitz and Marc de Gouvenain; J. Louis Barbançon, Nicolas Kurtovitch, Christophe Augias andFrédéric Ohlen (the four from New Caledonia).

The event was largely covered by the local media. You can read an article published at La Dépêche de Tahiti and interwiews with several authors here.

Writing in the South Pacific, be it in English or French, means often a struggle for identity, a claim for traditional cultures, be they Ma’ohi, Maori, Kanak or Aboriginal, but also the cultural heritage of descendants of settlers (willing or unwilling) and immigrants. Writing (and other cultural activities) is also a way to find a new balance between local and colonial cultures, a way to build an understanding. Oceania, therefore, has to be considered as a promising land of culture, where diversity is a guarantee of progress, following Jean-Marie Tjibaou’s moto : « Our identity is ahead of us, not behind ».