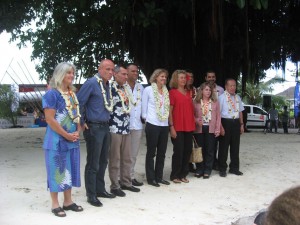 Marc de Gouvenain, on behalf of Pontas, attended the 7th edition of the FIFO (Oceania International Film Festival) 2010 in Papeete (25th-31st january), where he could meet a number of producers and film directors from all over Oceania. The FIFO focuses on documentaries and could present this year films coming from the Pacific, from Hawaï to Papua New Guinea, from Australia to French Polynesia, with numerous interesting subjects such as the climate refugees (Te Henua e Noho), the life of a homeless aborigene of Australia (Bastardy), resistance to ongoing destruction of sacred sites (Noho Hewa), forgiveness after the tragical events of 1980 in New Caledonia (Returns to Canala), the difficult days of the photographer of Lake Eyre (Salt) and many others…

A contract of international representation by Pontas has been signed for Zoe McIntosh’s film Lost in Wonderland. You can watch the trailer here. And read an interview with the film makers here.

This film ravels the puzzle of a man who has been a lifelong battler for truth, justice, and the right to wear pretty frocks. In 2006, in New Zealand, lawyer Rob Moodie was charged with contempt after publicly releasing a court-suppressed report implicating the Army. He turned up to the High Court dressed as Alice in Wonderland. Moodie is a straight bloke who likes to wear dresses. To some, he seems and eccentric oddball, to others he’s a hero. He is an enigma to most. Until now.