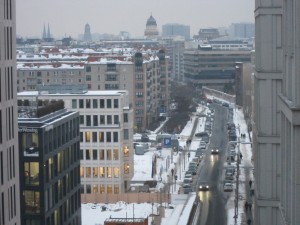 Despite the wintery weather, the European Film Market (EFM) 2010 hit new records in industry attendees and visitors. The European Film Market runs for nine days as part of one of the most important film festivals in the world, the Berlinale. As the first major film event of the year, it is a magnet for international industry professionals, and is seen as a barometer for the upcoming year in film.

The EFM is the business centre of the festival, taking place in the magnificent renaissance exhibition hall of the Martin-Gropius-Bau, and in the official second location at the EFM Marriott Offices and Stands in the deluxe modern Marriott Hotel, both just minutes away from the festival headquarters at Potsdamer Platz in the heart of contemporary Berlin. A mix of old and new, innovative and historical - it is a city full of contradictions, whose highly charged atmosphere is reflected in the energy of the Market.

The successful EFM 2010 closed its doors on Friday, February 19th and  within this market it took place the Berlinale Co-Production Market: a two-and-a-half-day event for about 450 international producers, sales agents, distributors as well as broadcasting and funding representatives active in the field of co-production. This year, Anna Soler-Pont was invited as “special guest” and she had the opportunity to present the Pontas activity in the film industry: as a literary agency selling film rights of books with adaptation possibilities, as production company developing and packaging projects and as international film sales agency.

In addition to the intensive one-on-one meetings, participants at the Berlinale Co-Production Market could find the latest hands-on information and make new contacts through the many networking opportunities during the market. Case Studies on Berlinale films elaborated on current trends in co-production and financing opportunities and in Theme Talks participants could exchange experiences with experts and colleagues on selected topics. During a Speed Matching session, participating producers made new contacts during successive, informal 10-minute meetings.

First launched in 2006, Books at Berlinale is the world’s first market for literary adaptations linked to an A film festival, and, once again, Pontas was able to be there. On the third day of the Berlinale Co-Production Market, representatives of the book publishing industry meet with registered producers interested in pre-selected literary material at a joint breakfast. At "Breakfast & Books", representatives of publishing houses and literary agents presented new, selected works especially well suited for screen adaptation. After the project pitchings, interested producers could talk directly to the film rights holders.