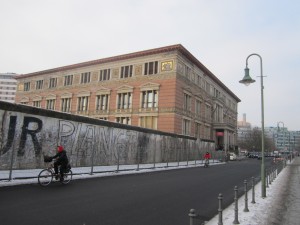 The European Film Market (EFM) runs for nine days as part of one of the most important film festivals in the world, the Berlinale. As the first major film event of the year, it is a magnet for international industry professionals, and is seen as a barometer for the upcoming year in film. Once again,Anna Soler-Pont had the opportunity to enlarge the network in the film industry and present the Pontas activity to new contacts: as a literary agency selling film rights of books with adaptation possibilities and as a production company developing and packaging film projects.

In the photos below: the magnificent exhibition building of Martin-Gropius-Bau where the EFM takes place, next to a piece of Berlin’s wall; and Majd Hijjawi (independent Jordan producer who worked as an intern in Pontas for five months last year as part of her studies at Media Business School) with Anna Soler-Pont.

From left to right: Patrick Nebout (producer) and Maria Dahlin (financial producer) at Nice FLX Pictures are working on the film adaptation of Jonas Jonasson’s novel The 100-Year Old Man Who Climbed Through the Window and Disappeared, whose rights they acquired last year from Pontas. The film will be written, directed and co-produced by Felix Herngren, starring Robert Gustafsson, one of Sweden’s most beloved actors. The film will start shooting in December 2012, while US studios are already in conversations for the remake rights and international distributors have started to buy some rights. Here’s an article published in Variety during EFM.

Ayesha Chagla and Rami Yasin are associated producers together with Tim Smythe at Film Works Dubai, who have recently acquired the film rights of the novel Mornings in Jenin by Susan Abulhawa from Pontas. The book is a bestseller in several languages and is published by some of the most prestigious publishing houses in the world.

Sonja Heinen, the head of the Berlinale’s Co-Production Market, was successful again with the organization of this two-and-a-half-day event within the EFM, including also “Books at Berlinale”, the world’s first market for literary adaptations linked to an A film festival, where producers get to meet literary agents and are in touch with selected books with high potential for screen adaptation. In the picture, withThierry Decourcelle, French producer at TF1 International, who is always actively looking for novels to adapt. And Sharon von Wietersheim, producer at Eclipse Films, based in Germany, currently developing and packaging The Violin of Auschwitz based in the bestselling novel by Catalan author Maria Àngels Anglada, translated into twenty languages and whose rights were also acquired from Pontas.