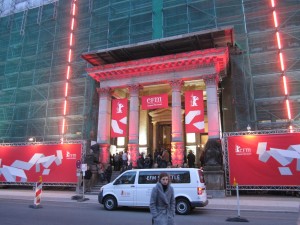 The European Film Market (EFM) runs for nine days as part of one of the most important film festivals in the world, the Berlinale. As the first major film event of the year, it is a magnet for international industry professionals, and is seen as a barometer for the upcoming year in film. Once again, Anna Soler-Pont had the opportunity to enlarge the network in the film industry and present the Pontas activity to new contacts: as a literary agency selling film rights of books with adaptation possibilities, as a production company developing and packaging projects and as an international film sales agency.

The EFM is the business centre of the festival, taking place in the magnificent renaissance exhibition hall of the Martin-Gropius-Bau, and in the official second location at the EFM Marriott Hotel Offices and Stands, both just minutes away from the festival headquarters at Potsdamer Platz.

Within the EFM market it took place the Berlinale Co-Production Market: a two-and-a-half-day event for about 450 international producers, sales agents, distributors as well as broadcasting and funding representatives active in the field of co-production. As part of the Berlinale Co-Production Market, representatives of the book publishing industry meet with registered producers interested in pre-selected literary material at a joint "Breakfast & Books". This year Juergen Boos, director of the Frankfurt Book Fair, attended the event, as well as part of the team in charge of the Frankfurt Sparks and the new programme “Content for Films” that will take place next October 12 and 13 (in the picture, Katja Böhneand Britta Friedrich with Sydney Levine).